By the end of these basic tutorials - which collectively comprise an initial module within Part 1 of this broader set of software development tutorials I’m writing - you’ll be ready to dive into full-blown development with a real web app.

Teaching web development in the 2020s is profoundly different than it was a decade or two ago. While understanding the fundamentals of HTML, CSS, and JavaScript remains essential, there are now an overwhelming number of fantastic tools, languages, and libraries to choose from when architecting a “front-end” (i.e. code for web browsers) and a “back-end” (i.e. code for web servers).

In the first post in this new mega-tutorial series, I described the motivation, audience, and purpose of writing this series up. I didn’t go into too much detail regarding why the specific software stack was chosen (besides the fact that my partners and I use it professionally on a daily basis...and we are actively hiring apprentices), so it’s worth pausing for a moment to discuss the software stack and approach.

I first began building Ruby on Rails applications in 2005, shortly after learning database-driven programming with PHP and MySQL. Ruby on Rails was - and largely still remains - a web development framework to facilitate the rapid building of software applications for web browsers. Over the last 15+ years, the Rails community has grown, evolved, and matured significantly. Many large companies run their software with Rails (such as Shopify and Github).

Therefore, while there are plenty of other fantastic server-side languages and frameworks to build applications with, the reason why I’m teaching Rails is because there are plenty of paying jobs out there that rely on it, the community is strong, and it’s a fantastic choice for building web/mobile software for startups.

In addition, learning Rails will provide you with the core fundamentals of web development that can be applied to countless other languages and frameworks for your future career.

Why introduce both Hotwire and React here?

Now, if your web/mobile developer friends are scanning this article series for you (which I’d recommend you have them do!), they are probably wondering why I’m introducing both Hotwire and ReactJS. Afterall, these are two fundamentally different approaches for building reactive web applications in the browser (i.e. fast, “native”-like experiences; as if it were software installed directly on your computer or phone).

In short, there are three main reasons why I’m introducing both:

In addition, DHH himself (the creator of Rails) writes in the preamble to the Stimulus Handbook:

“Furthermore, you don’t even have to choose. Stimulus and Turbo work great in conjunction with other, heavier approaches. If 80% of your application does not warrant the big rig, consider using our two-pack punch for that. Then roll out the heavy machinery for the part of your application that can really benefit from it.”

And that is indeed how we’ll approach it. In later posts we’ll dive in with Hotwire and React /Redux after Stimulus and StimulusReflex, in preparation for the extra credit opportunity to build a more “heavy machinery” React app if desired.

But first, let’s start with the basics. :)

Hypertext Markup Language (HTML) is the fundamental language of web browsers. As the language has evolved, it has become more about identifying parts of a document (e.g. header, nav, sections, paragraphs, etc..) and less about how the document looks to end users (that is what CSS is for, which we’ll talk about in a future post in this series). For now, we’re going to jump right in from where you left off from the Windows setup or Mac Setup tutorial from before, with a Rails web server fired up on port 3000 on your machine and a web browser tab that looks something like this: 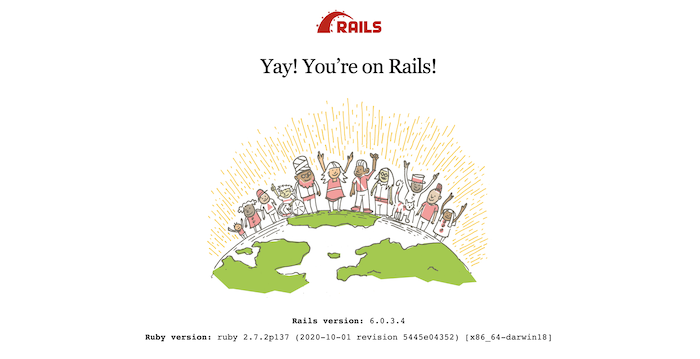 Before we get started, go to https://github.com/new and be sure to be logged in as your GitHub user. Enter “quotesapp” for your repository name, leave it to be “public” if you’d like (or private is fine, too), and don’t check any of the initializing checkboxes: 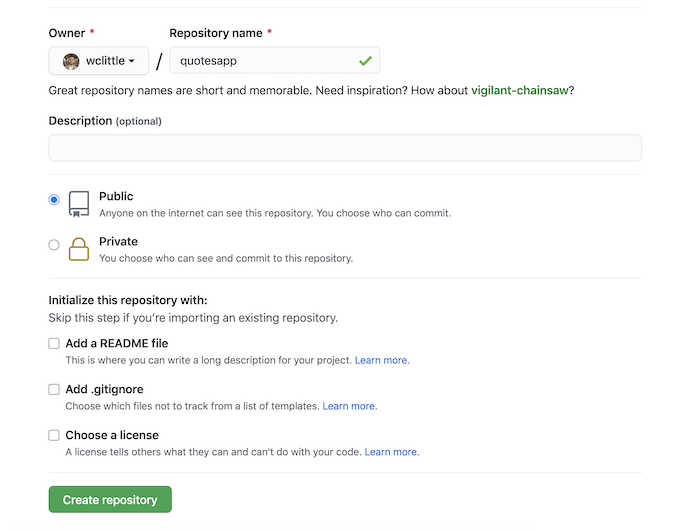 After you create your new repository, make sure you are in your terminal at the root of the quotesapp folder, then - assuming you have already setup your login details and authentication with Github (Mac users, you may need to read the relevant sections from the windows tutorial to get your ssh setup) - enter the following (be sure to replace in your Github username where it says YOUR_USERNAME below):

Good. Now you have successfully captured the initial state of your Rails app and pushed that “commit” up to your Github repository for safe keeping. As we go along, we’ll make changes to our code and push commits up to Gihub so we can keep track of progress.

In real-life situations in a team, you will work on a “branch” within git, push commits to that branch, then go through a code review process (e.g. by first opening a “pull request”) to have that branch reviewed and merged into your project’s master branch. We’ll talk through that process later in this tutorial series. For now, we’ll be pushing commits directly to your master branch.

If you have time now to pause here to learn more about Git, I’d highly recommend https://learngitbranching.js.org/

If you are ready to dive in and get started here, we’re first going to create a controller in Rails called “Welcome”.

In your code editor (Visual Studio Code, which we’ll refer to as simply “VSC”), make sure to have your quotesapp folder loaded (File -> Open, then select your quotesapp folder). Then, in your directory view, click into your “app” folder and then right-click on your “controller” folder: 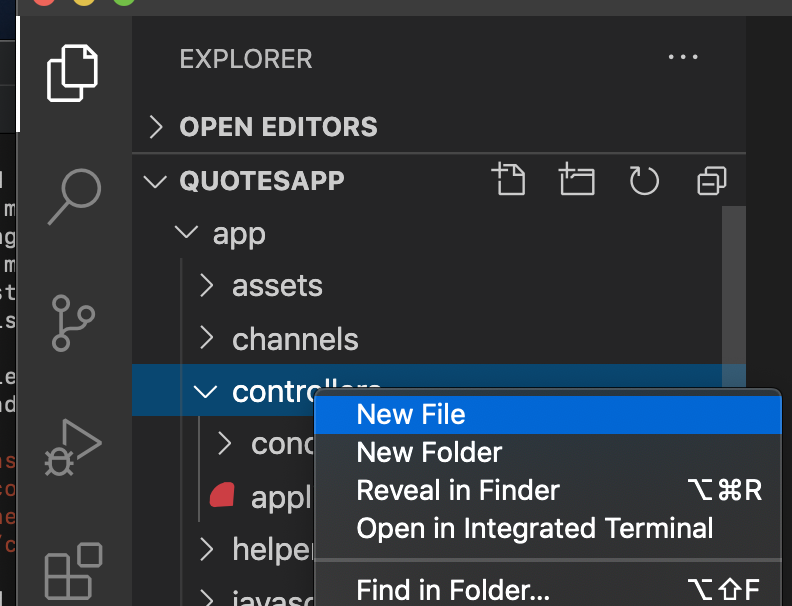 In that file, have it contain:

Rails works in what’s called a “Model-View-Controller” architecture (MVC), where - simply put - variables are set up in a controller file and passed to a view to render what you want seen in the browser. Along the way, we’ll create models (such as “quotes”) that can be setup in our controllers before they are passed into our views.

We’ll talk a LOT more about that as we go, so don’t worry if it doesn’t make sense yet.

Next we’re going to create a folder in app>views called welcome (right click on views and create the new folder).

Next we are going to right-click on that new welcome folder to create a file called index.html.erb:

And in that file we are going to enter:

Finally, we’re going to open up our route.rb file (it’s in the config folder at our quotes app root) and enter on line 3:

Now, if your web server isn’t already running, be sure to have “rails s” entered in your terminal from your quotesapp root so the web server fires up to listen on port 3000 (it will do so automatically).

Great ! We just completed our first hello world step in this tutorial.

When you first load up a vanilla Rails install, there are no routes, controllers, views, or models set up, so Rails by default shows that “Yay! You’re on Rails!” page. What we did was setup our first controller, our first method in that controller called “index”, our first “view” file called index.html.erb that corresponds to that index method, and we pointed our default “root” route to our index method in the welcome controller so that when we go to “/” in our web browser it will load up the contents of that method (i.e. our Hello World heading).

Now, there’s an important setup here that Rails took care for us in the background.  If you open up the file app>views>layouts>application.html.erb you will see the following:

In reality, this is the base layout that is being sent to the web browser. Here’s what the lines mean:

That’s it! Pretty cool, huh? If we look at all the contents of our “View Source” we see: 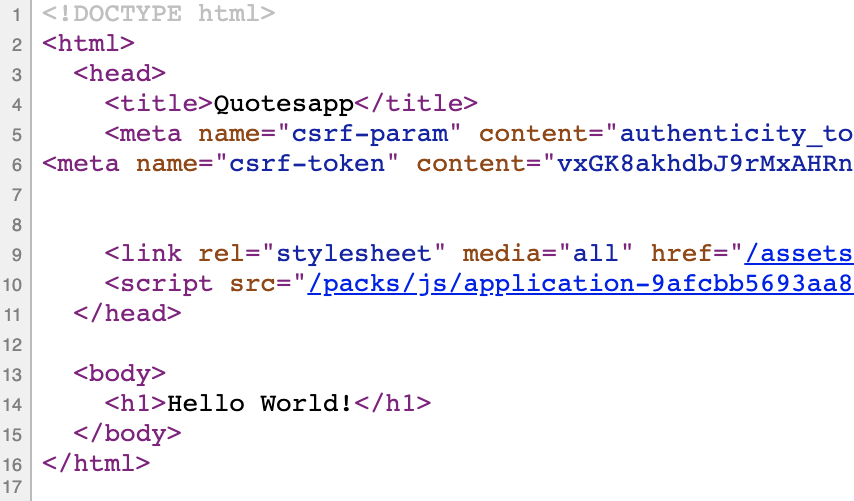 All those strings of characters are meant to protect our app (in the case of the csrf-token) or give our asset files (CSS and JavaScript) a “fingerprint” to make it easier for us to let our users’ browsers pick up changes when we deploy new code.

Before we move onto the next session, let’s go ahead and create a commit and push it to github to save our progress. It’s good to start with a git status command:

The file and folder below are obviously the new things we’ve added, and to see what we changed in that routes file, let’s do a:

Which should print out the following:

This shows us that we’re about to commit a change where we’ve added our root route.  In general it is always a good idea to run a git status and git diff to see what you are about to commit.

In VCS, you can also click over to the Source Control section to see your code changes a different way:

Finally, assuming your changes look like this commit diff, let’s go back to our terminal and add, commit, and push the files:

You should see output that you successfully pushed that commit up to your Github account!

Continue to the next post: Part 2: Shell Scripting and Cascading Style Sheets (CSS)

Topics: Software Development Ruby on Rails
Will Little Subscribe
Managing Director at Prota Ventures.
I'm a bioengineer-turned-software-developer and venture builder/investor. Learn more about me professionally on LinkedIn, personally here, and check out the podcast I host, Ventures.