For those unfamiliar, ketogenic dieting is any diet plan “low-carb” enough to switch your body into a state of producing and burning a significant amount of ketones, specifically acetoacetate (AcAc) and its derivatives beta-hydroxybutyrate (BHB) and acetone.

For those interested in background reading, I’ve previously written summary articles about the science of fat metabolism and ketosis here and here.

These molecules, especially AcAc and BHB, are used by the brain and other tissues for energy, and facilitate a number of health benefits that I’ll address below.

While the biological processes involved are extremely complex, I’d invite you to use this as the beginning of an important conversation for you and your doctor to explore together. Indeed, ketogenic dieting may or may not be appropriate for you, so please consult with your doctor before experimenting on yourself.

Click here to join my newsletter and I’ll keep you posted when I get new articles up (FYI: as a heads up, I also write about entrepreneurship and web development. I started writing about fat metabolism and ketogenic dieting here at KetoSchool out of pure hobby interest, as there are relatively few resources out there that teach the underlying science).

Ketogenic diets were notably first used at the Mayo Clinic in the 1920s to treat children with epilepsy. While the exact mechanism of seizure prevention on a ketogenic diet is still a mystery, researchers believe it has something to do with the increased stability of neurons and up-regulation of brain mitochondria and mitochondrial enzymes.

Related to this research, some serious attention has been given to ketogenic dieting and Alzheimers Disease. Scientists have discovered increased cognition and enhanced memory in adults with impairments in these areas, and a growing body of research shows improvement at all stages of dementia. Ketosis has been shown to be effective against Parkinson’s disease as well.

For a broader audience of dieters, the often-reported side effects of increased mental clarity and focus and less frequent and less intense migraines are likely related to the more stable blood sugar and altered brain chemistry that improves memory and cognition as well.

Fighting some types of cancer

Here is important background from the abstract:

Here is a good overview article of recent animal studies, which includes this 2013 article from Dom’s lab: 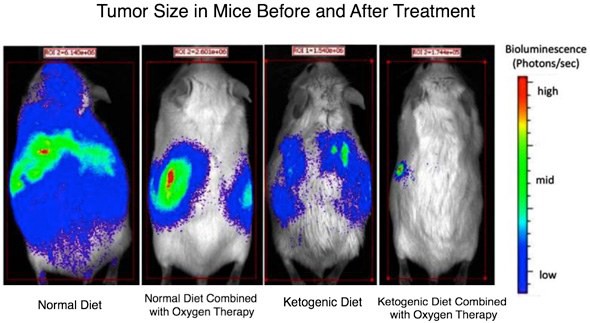 Of course, please do not ignore your doctor’s advice when it comes to cancer treatment, but — like many of the topics addressed in this article — it may be helpful for you to bring up the conversation.

While it may seem counterintuitive that eating a higher percentage of fat in your diet lowers triglycerides, it turns out that the consumption of excess carbs (especially fructose) is the key driver of increasing triglycerides.

And regarding HDL and LDL particles (which the body uses to move fat and cholesterol around), ketogenic dieting helps raise HDL (“good cholesterol”) and improve the profile of LDL (“bad cholesterol”).

A Nature Medicine article last year found a likely mechanism behind what people have known for decades: ketogenic dieting is profoundly anti-inflammtory and helps with a host of related health problems.

The researchers found that “the anti-inflammatory effects of caloric restriction or ketogenic diets may be linked to BHB-mediated inhibition of the NLRP3 inflammasome.”

In other words, the key player in many inflammatory diseases is suppressed by BHB, which is one of the main ketones produced from a ketogenic diet.

Thus the implications on arthritis, acne, psoriasis, eczema, IBS, and other diseases involving inflammation and pain are significant enough that it is prompting more research attention.

By day 4 or 5 on a ketogenic diet, most people report an increase in general energy levels and a lack of cravings for carbs. The mechanism here involves both a stabilization of insulin levels and readily available source of energy for our brain and body tissues.

Sleep improvements are a bit more of a mystery. Studies have shown that ketogenic dieting improves sleep by decreasing REM and increasing slow-wave sleep patterns. While the exact mechanism is unclear, it likely is related to the complex biochemical shifts involving the brain’s use of ketones for energy combined with other body tissues directly burning fat.

The most common cause of kidney stones and gout is elevated uric acid, calcium, oxalate, and phosphorus levels as result of a complex combination of unlucky genetics, dehydration, obesity, sugar consumption (especially fructose), and eating/drinking things with a lot of purines and alcohol (e.g. meat and beer).

An important caveat is that ketogenic diet temporarily raises uric acid levels — especially when dehydrated — but over time they come down:

…uric acid goes up promptly in the same time frame that ketones go up, but after 4–6 weeks, despite ketones staying up, uric acid starts to come back down. Based on these data and my clinical observations in thousands of patients, uric acid returns to or below pre-diet baseline within 6–12 weeks despite the person remaining is a state of nutritional ketosis.

It is well known that grain-based foods, nightshade vegetables like potatoes and tomatoes, and sugary foods increase the likelihood of acid reflux and heartburn. Therefore, it’s not surprising that eating a low-carb diet improves these symptoms and actually confronts the root problems of inflammation, bacterial issues, and autoimmune responses.

Related to this, it is known that changes in diet rapidly and reproducibly alters the human gut microbiome. Dr. Eric Westman describes at length how a host of problems are significantly reduced or removed as a result of microbiome changes on a ketogenic diet.

…by taking away the carbohydrate in the food, I can pretty much fix every gastrointestinal problem that affects people today.

Research also shows that carbs in the diet is one of the key ingredients for gallstones. Somewhat counter-intuitively, eating a sufficient amount of fat when carb intake is down helps clear out the gallbladder and keep things running smoothly to prevent gallstones from forming.

Battling a wide variety of neurologic and metabolic diseases

Kristin W. Barañano, MD, PhD and Adam L. Hartman, MD published a review in 2008 discussing the potential mechanisms of how a ketogenic diet can treat the following diseases: 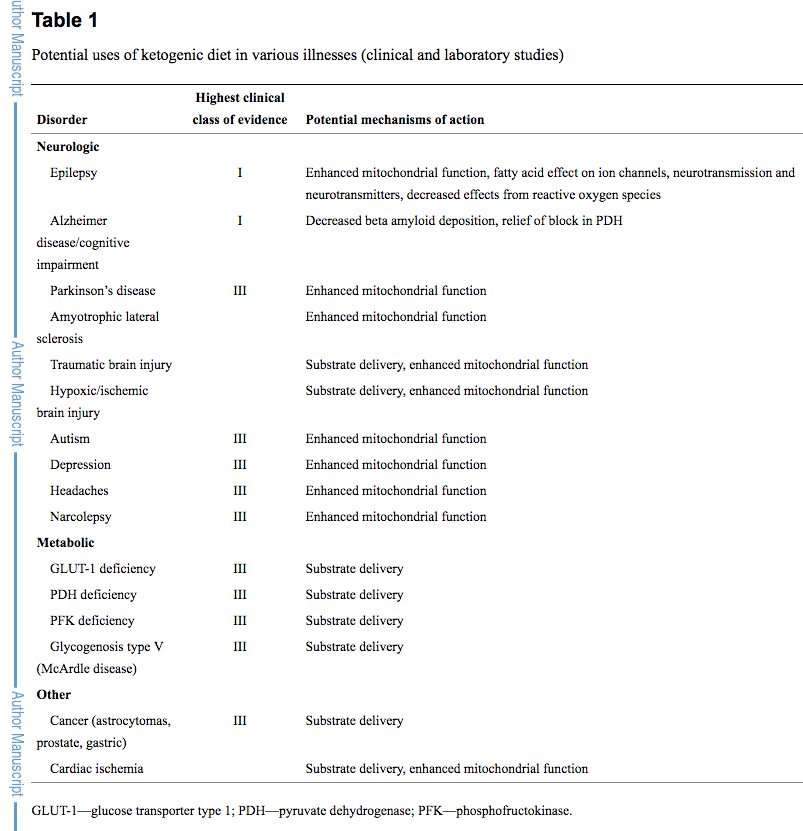 Serious attention is also being given to treating Multiple Sclerosis with a ketogenic diet based on similar mechanisms.

An extensive review published in 2013 looked at the research and evidence of ketogenic diets enhancing fertility (long story short, it looks promising). Studies also show that Polycystic Ovary Syndrome (PCOS) can be treated effectively with low-carb dieting, which reduces or eliminates symptoms such as infrequent or prolonged menstrual periods, acne, and obesity.

Overall, keeping blood sugar levels low and stable, which results in lower overall levels of insulin in the blood, helps equilibrate and stabilize other hormone levels, especially in women. This naturally has downstream benefits on a wide variety of metabolic pathways related to insulin, such as hunger and energy utilization.

As any diabetic will tell you, it is well known that high blood sugar has a detrimental effect on eyesight and leads to an increased risk for cataracts. It’s therefore not surprising that keeping blood sugar levels low improves eye and vision health, as a gazillion people have shared online, and as related diabetes research has proven.

BHB, specifically, has been shown to promote muscle gain. Combined with tons of anecdotal evidence over the years, there is an entire movement behind bodybuilders using a ketogenic approach to gain more muscle and less fat (typically muscle gain also comes with fat gain, so there’s understandable attention being given toward preventing this).

In addition, Dr. Stephen Phinney and Dr. Jeff Volek have a number of papers published about ketogenic dieting for ultra-endurance athletes. In short, once these athletes are fully fat-adapted, there is evidence to suggest that mental and physical performance is significantly improved beyond a “normal” carbohydrate-rich diet.

And last but not least, curbing diabetes, obesity, and metabolic syndrome while sparing muscle loss

Of course, there are over 160 research papers currently on Pubmed with the words “diabetes” and “ketosis” or “ketogenic” in the title alone. It’s beyond clear that ketogenic dieting is extremely effective for many people with both type I and type II diabetes for all the reasons discussed above related to keeping blood sugar levels and insulin in check.

In addition, recent papers within the last few years investigating the effect of ketogenic dieting on obesity conclude that it’s an extremely effective way to not only lose fat, but spare muscle loss while curbing many disorders related to obesity as well (many of which have been discussed above), including the set of symptoms and risk factors known as Metabolic Syndrome (i.e. abdominal obesity, diabetes, hypertension, and elevated cholesterol)

For further reading, I would recommend this 2013 review article from the European Journal of Clinical Nutrition: Beyond weight loss: a review of the therapeutic uses of very-low-carbohydrate (ketogenic) diets

Author’s note: I want to stress again the importance of consulting with your doctor before you try ketogenic dieting. The more I study this area of science, the more I realize that every individual is extremely unique when it comes to health issues and there are a ton of reasons why you should NOT go full-on keto (especially if you are prone to kidney, heart, or gallbladder issues). That being said, for many people this form of eating is life changing, and the amount of scientific research supporting a ketogenic lifestyle is significantly increasing. Subscribe to my newsletter to stay posted when I publish new articles, and I’d appreciate any and all feedback/corrections on the content I’ve written above. Thanks! (Image credit)

Topics: Health Science Keto
Will Little Subscribe
Managing Director at Prota Ventures.
I'm a bioengineer-turned-software-developer and venture builder/investor. Learn more about me professionally on LinkedIn, personally here, and check out the podcast I host, Ventures.