After publishing The Science Behind Fat Metabolism a couple weeks ago, I received a tremendous amount of helpful feedback from scientists, medical professionals, and other health experts. Cheers, Internet. I appreciate the feedback and refinement. I’ve updated the article accordingly and will continue to do so as more comments are submitted.

I also got a bunch of questions about low-carb dieting, hence my attempt in this article to summarize the underlying science. As always, if you read anything below that needs changing, let me know and I’ll do so quickly.

“Ketogenesis” means “generating ketones”, which your body does naturally to generate energy from fat when carbohydrate sources are sufficiently low (e.g. after intense exercise, long periods of fasting, etc.). “Ketogenic diets” are thus ways of hacking your body into this starvation-like state.

Specifically, on “normal” diets (eating more than 100g carbs a day), before sending excess energy to fat cells, your liver and muscles will store carbs in a relatively simple storage mechanism called glycogen (these branches below are composed of glucose molecules, which is what most of the carbs you eat quickly get reduced to): 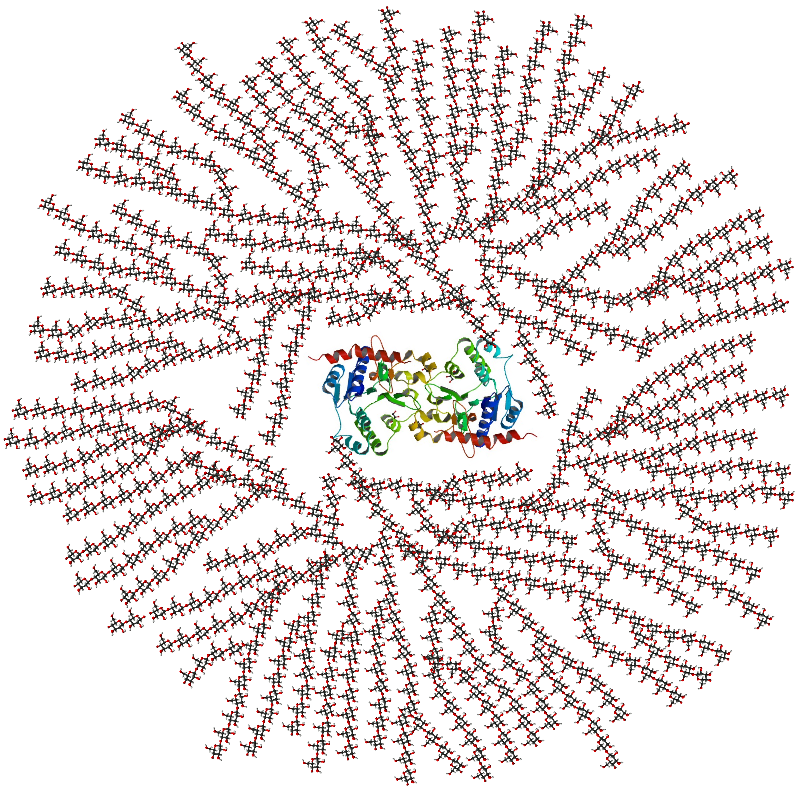 As these branches get sufficiently used up, some interesting changes start happening. Your brain normally runs on ~100g of glucose per day, so when your liver isn’t able to pump out sufficient glucose for this requirement, it starts producing ketone bodies to get the job done (and — yes — your brain is totally fine with getting up to ~70% of its energy from these ketone bodies, a process which gradually ramps up from 0% to 70% and takes about 3 weeks to occur).

What’s interesting during these ~3 weeks of “induction” is that all the other tissues in the body use a decreasing amount of ketones for energy, eventually using mostly fat (specifically, free fatty acids released from fat cells). Thus, after induction, your body is producing a relatively small amount of ketones (less than ~280 calories worth) to keep your brain happy.

So how do we get energy from ketones vs. glucose?

Under “normal” conditions, insulin helps glucose from the blood stream get into cells, where glucose is converted into pyruvate and sent into the citric acid cycle to generate energy like so (I know this is overwhelming, but pay attention to the NADH production): 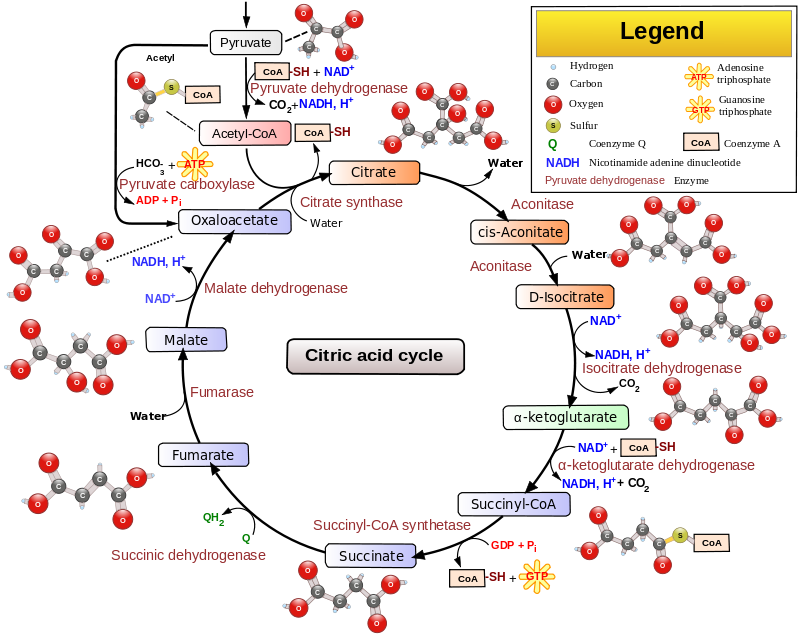 Then, all that NADH gets converted to ATP (our cells’ main energy source) via oxidative phosphorylation.

Now, when there’s not enough glucose around to generate Acetyl-CoA from pyruvate as shown above, then Acetyl-CoA is generated mostly from oxidizing fatty acids like so: 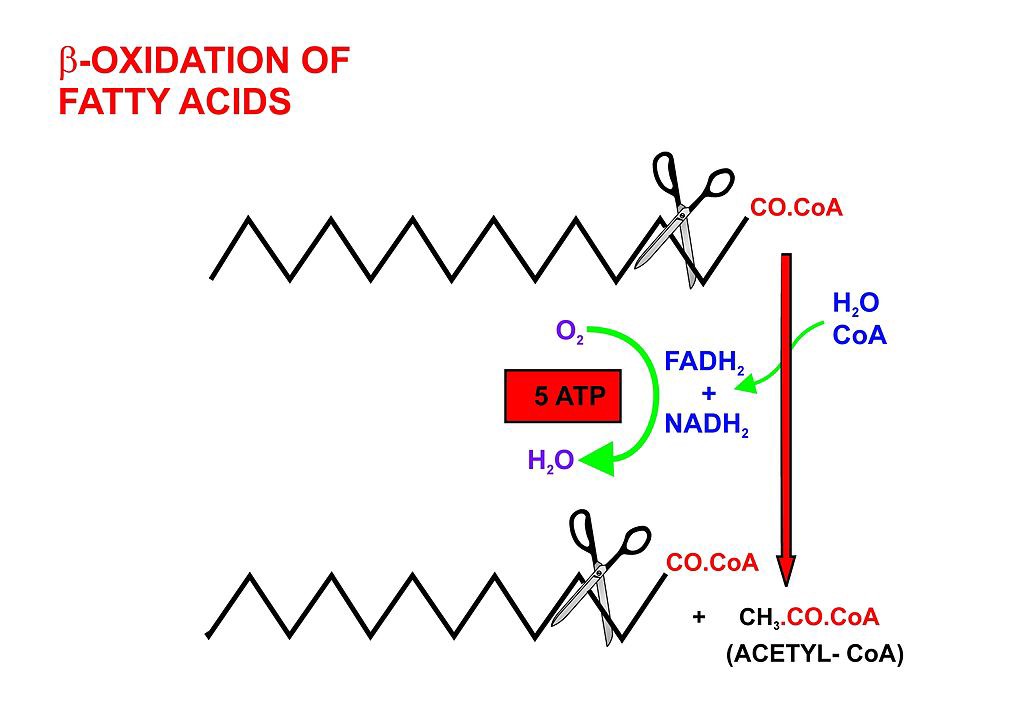 This not only produces a good amount of ATP on its own, but the build-up of Acetyl-CoA in liver cells induces ketogenesis like so: 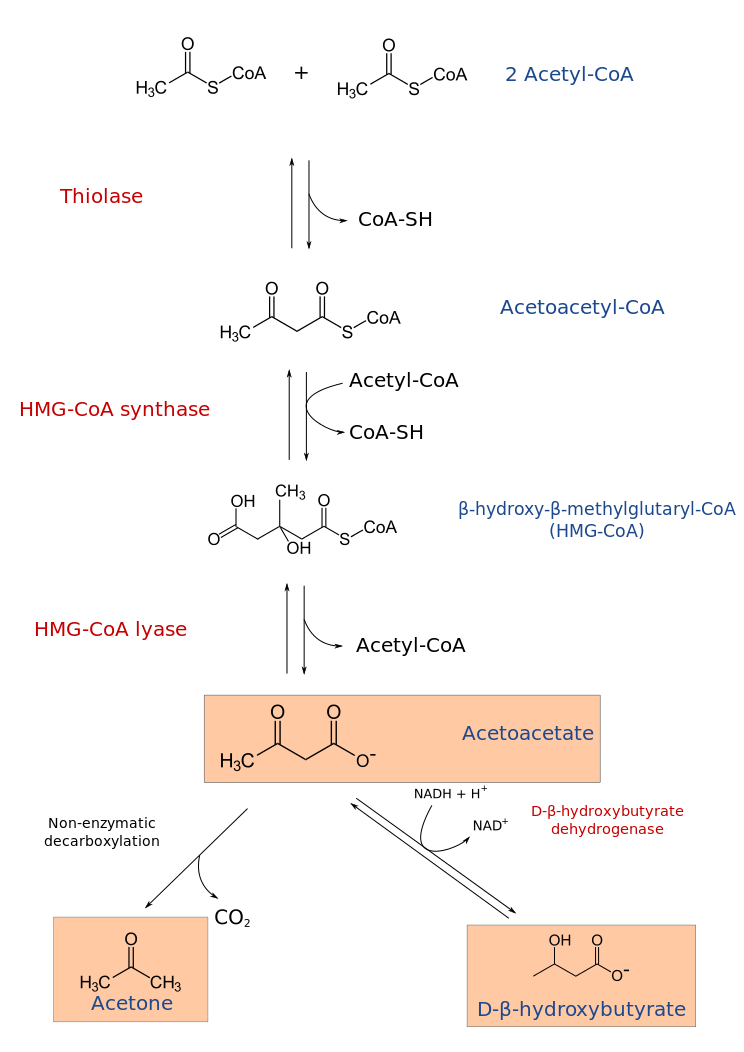 If their concentration is high enough in the blood, some of these molecules are excreted in breath, sweat, and urine (hence the fruity smell of keto-dieting people during induction). But most of the acetoacetate and beta-hydroxybutyrate is sent from the liver around to other tissues, where they are reconverted to Acetyl CoA… 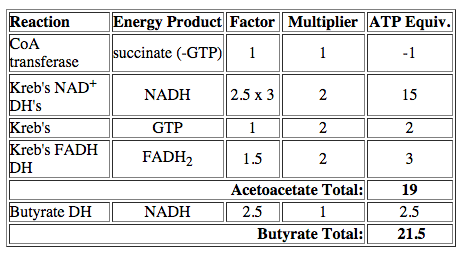 And in case you are wondering, in liver cells the citric acid (aka Krebs/TCA) cycle can’t perform because key intermediates such as oxaloacetate are busy generating glucose for the body (mainly your brain) to use. Thus, in ketosis your liver cells rely mostly on the ATP derived from oxidizing fatty acids as described above.

Ok cool, so how do I lose fat on a ketogenic diet?

You lose fat on a ketogenic diet the same way you do on other diets: more fat comes out of fat cells than goes into them.

One reason why people lose fat while doing keto is that hunger goes waaaaaay down, forcing more fat to come out of storage for energy than goes in. Mechanistically, without constant insulin spikes, your body can more easily take advantage of leptin-induced satiety.

With insulin levels relatively low on a regular basis, fat is pulled out of fat cells more readily and the body gets increasingly used to burning fat (consumed and stored) for energy.

Keto-dieting also helps you wean off of the dopamine addiction that comes from spiking blood-sugar, and has been shown to raise HDL, lower LDL, and lower triglycerides in obese patients.

If you’re interested in getting serious about keto dieting, discuss it with your doctor and find in-person and online communities (like /r/keto on Reddit) to help support you in your journey.

What else would you recommend?!

Author’s note: as I mentioned above, I’d love to hear from anyone with suggestions on how to improve this article. Feel free to comment above (highlight something) or below. Subscribe to my newsletter and I’ll let you know when I get new content up. I write mostly about startup/tech stuff, but occasionally I’ll write articles on topics like this. Let’s keep the conversation going. Thanks!

Topics: Health Science Keto
Will Little Subscribe
Managing Director at Prota Ventures.
I'm a bioengineer-turned-software-developer and venture builder/investor. Learn more about me professionally on LinkedIn, personally here, and check out the podcast I host, Ventures.