Well, it’s official: the lofty promises made during the 2017 crypto frenzy have come up dramatically short. The mad rush of teams raising insane amounts of money that year have not (yet) produced mass-adoption of decentralized applications. As every experienced startup investor and founder knows (especially in hindsight), raising a ton of money without a product — let alone a proven market that wants that product — is a recipe for disappointment.

All is not lost, however. While many have been struggling to find examples of decentralized protocols that solve real problems (and actually deliver value, are designed to scale well, etc…), it appears that at least one is in the works that everyone in the crypto-world should study carefully: Livepeer.

Streaming live video to users is ridiculously expensive and hard to execute. Not only must the right equipment and software be used to mix and prepare a source feed, but that feed (audio and video) must be transcoded to various formats to accommodate a diversity of screen dimensions and download speeds, and then it needs to be distributed around the world to viewers.

Most live video creators therefore choose “free” services for transcoding and distribution, which can whimsically restrict content, change viewer experiences, and drop/tweak monetization policies (if any) without the consent of creators. This, as you can imagine, creates friction and drama, sometimes with profound geopolitical consequences.

Livepeer provides another model: transcoding services for live content creators via a decentralized network of machines that are incentivized to provide inexpensive and relevant computing power: 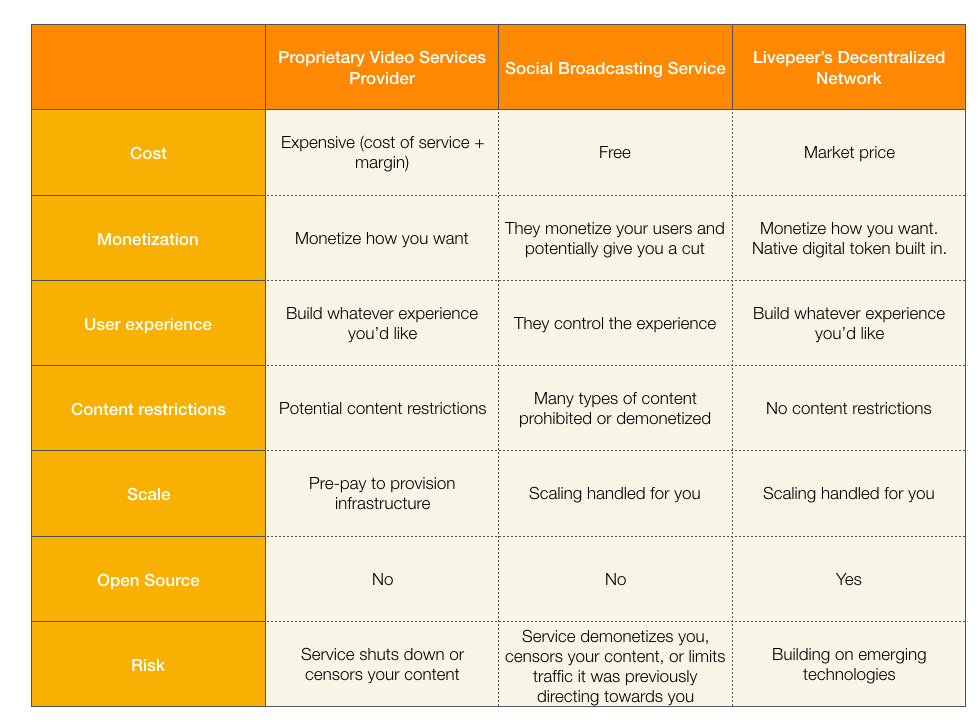 Livepeer holds significant promise to deliver value beyond just freedom from oversight and “power to the people” (which is still, of course, critically important). The network is also positioned to actually save companies money and enable startups to compete with large incumbents.

Where does the cost savings come from?

Well, services like Amazon AWS Elemental MediaLive and Core Cloud are around $3 per hour for transcoding (depending on specifics of input and output needs). What is critical for the Livepeer approach is their Video Miner Proposal which notes that all those Nvidia GTX 1080 cards out there mining cryptocurrencies (earning at best around $1.50/day currently) are also capable of encoding 48hrs worth of video (i.e. $144/day at current encoding market rate prices).

The key idea here is for all these miners with unused computing power to have the ability to switch on nodes within Livepeer and add only about 10% extra cost per day (i.e. $0.15). With this setup, there is plenty of margin to save content creators a massive amount of money (i.e. less than $144/day) AND also allow miners to draw significant additional income (much more than $0.15/day).

Importantly, the cost of actually distributing the content can be significantly higher than the transcoding costs, especially once you start getting a large number of viewers. For example, Amazon has published a detailed live video pricing example that explains 5k viewers watching at an average of 4 Mbps would cost about $747.07 per hour just to distribute.

Therefore, the even more important project from a cost-savings perspective Livepeer’s collaboration with Ethereum’s SWARM team to develop a decentralized Content Delivery Network that relies on peer-to-peer delivery.

With these cost savings in place, founders building applications for video, gaming, social, IoT devices, etc… that would never have been able to scale because of the prohibitive hosting bills will be suddenly able to bring new products and features to market.

Beyond cost savings, Livepeer’s approach to decentralization and incentive alignment with their token (LPT) is smart

Livepeer didn’t do an ICO and try to raise billions of dollars (which we now know leads to difficult — and often prohibitive — network dynamics and legal challenges). Instead, they invented a highly regarded distribution mechanism called a MerkleMine that came into effect after a 3-month period where anyone with 0.1 ETH in their account as of March 16th, 2018 could claim 2.4 LPT.

In addition, encouraging LPT holders to stake their tokens with their favorite transcoder(s) (which are soon to be called “orchestrator(s)”) to earn yield both encourages active participation in the network from token holders and incentivizes teams around the world capable of running orchestrator nodes and load-balanced transcoding pools to actually do so to make the network increasingly stable and performant. While Livepeer certainly isn’t the first network to utilize staking dynamics this way, it is certainly a shining example.

Finally, Livepeer’s decision to quickly launch a mainnet and iterate from there is the right way to build a decentralized network. While their early version only has 15 transcoders and is cost-prohibitive because of all the on-chain transactions needed to verify encoding, their new Streamflow iteration addresses these issues, introduces the concept of an orchestrator (which can load-balance to a pool of transcoders), and will increase the amount of nodes on the network by an order of magnitude.

Live streaming is changing our world

A rapidly increasing number of people are tuning into live streams for entertainment and news. Ninja’s stream with rapper Drake in March 2018, for example, had over 635,000 concurrent viewers (yes, to watch them play Fortnite). Twitch has around 15 million people that watch streams every day, and those numbers are growing: 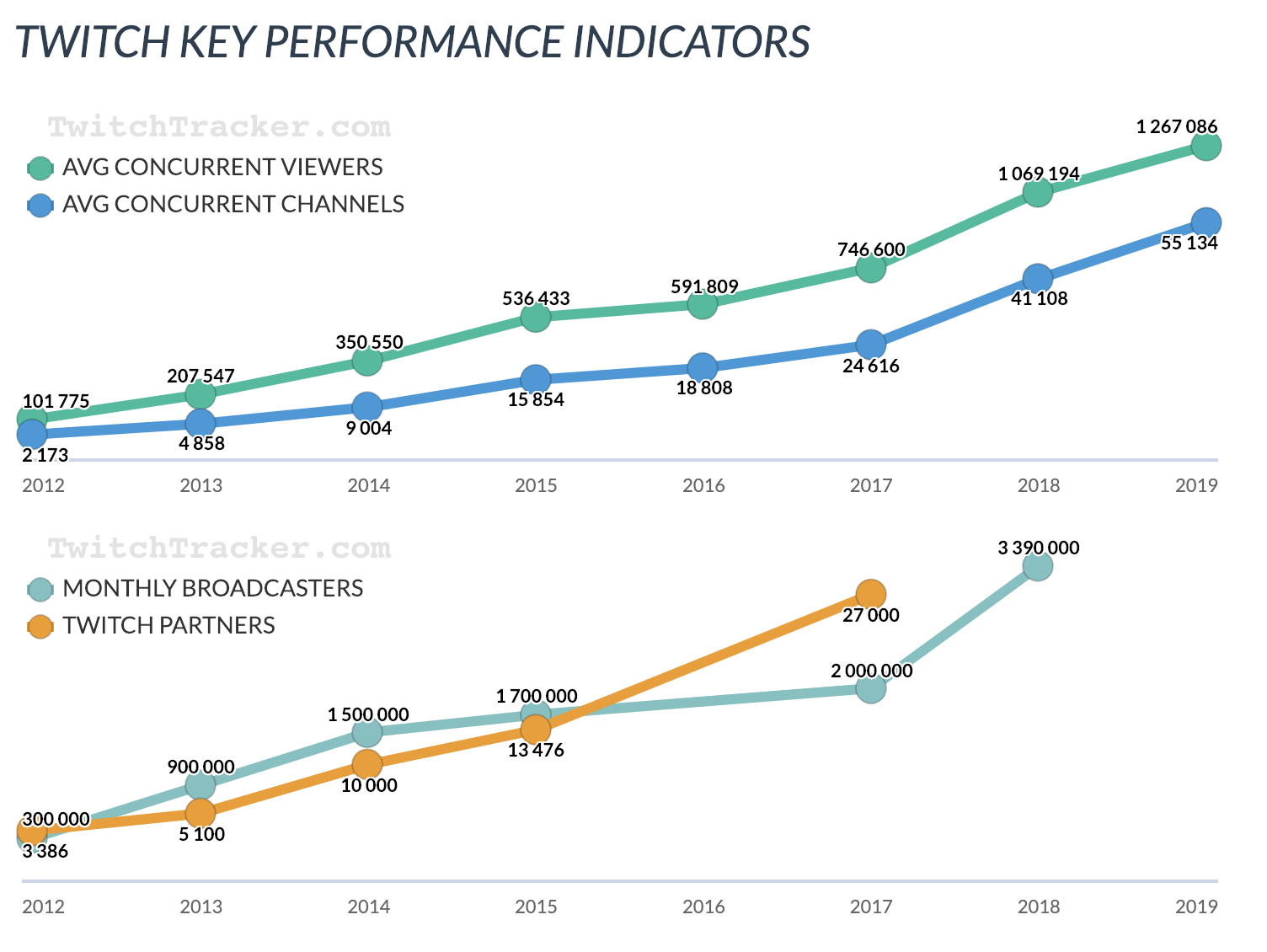 And, not surprisingly to parents of millennials, 63% of people ages 18–34 are watching live-streaming content regularly. The influencers creating these videos are making a significant impact on our culture.

Thus, in what will be a 70-billion-dollar market in a couple years, it’s hard to overstate how important the future of live video will be as it leaves the confines of Twitch, YouTube, Facebook, etc… and influencers are even more incentivized (financially and otherwise) to grow their audiences. Livepeer is brilliantly positioned to tap into this market and enable it to grow even faster with new startups and business models entering the scene in the coming years.

Author’s note: Thanks in advance for any suggestions/corrections for this article; I very much welcome feedback. If you own LPT and are looking for a reliable transcoder to stake your tokens to, I’d highly recommend this one operated by Figment Networks. Feel free to subscribe to my personal newsletter where, in addition to crypto, I also write occasionally about health science and startup life. Special thanks to Tony and Lorien for review and insightful conversations about the above article. And finally, before you leave, please feel free to comment below (or inline above), hit the clap button, and/or share this article with a friend. Let’s keep the conversation going. Thanks!

Topics: Blockchains Proof-of-Stake Livepeer
Will Little Subscribe
Partner at Prota Ventures.
I'm a bioengineer-turned-software-developer and venture builder/investor. Learn more about me professionally on LinkedIn, personally here, and check out my podcast, Ventures.