Whoop vs. Oura Ring vs. Apple Watch for Optimizing Sleep and Workout Performance with Continuous Glucose Monitoring and One Meal a Day: Part 2 In the initial post for this series I shared the basic experimental setup and example data output. Here, in the second and final part of this series, I’m going to dive into notable variables and examine the overall data to conclude initial lessons learned from this 30-day experiment.

As a quick reminder, during the initial part of the spring 2020 COVID-19 quarantine I decided to wear a Continuous Glucose Monitor while testing the differences between Whoop, Apple Watch, and Oura Ring. I had already been doing daily time-window eating between ~5:30-7:30pm (i.e. One Meal a Day, “OMAD”) for 6-7 months, and my ultimate goal with this N=1 experiment was to figure out how to optimize sleep and workout performance by tweaking food/drink intake and timing.

Insight #1: When not in ketosis and doing OMAD, not enough food or too few carbs produces sub-optimal sleep & poor next-day workouts

While in past experiments I’ve noticed that deep ketosis produces high quality (and a tad shorter) sleep and reasonable workouts, not surprisingly in this experiment when I decided to go low carb-ish or skimp on the quantity of food in a meal, the sleep quality (but not necessarily overall length) goes down.

For example, one day I decided to eat early and relatively low-carb-ish (then decided to eat 20 peanut M&Ms to see what would happen, followed by a short & intense workout later):

Top of pink bar is 55 mg/dL, top of spike after intense workout read 132mg/dL, but next day I recalibrated (see below) and realized the meter was running ~20mg/dL high. Time window here is 24hrs.

Interestingly, the 20 peanut M&Ms didn’t really spike blood sugar as much as I thought they would. Also note that light/moderate workouts drop blood sugar, whereas more intense workouts raise it.

Also, the sleep quality wasn’t great, even though the sleep meters said I was asleep for more than 8hrs total. 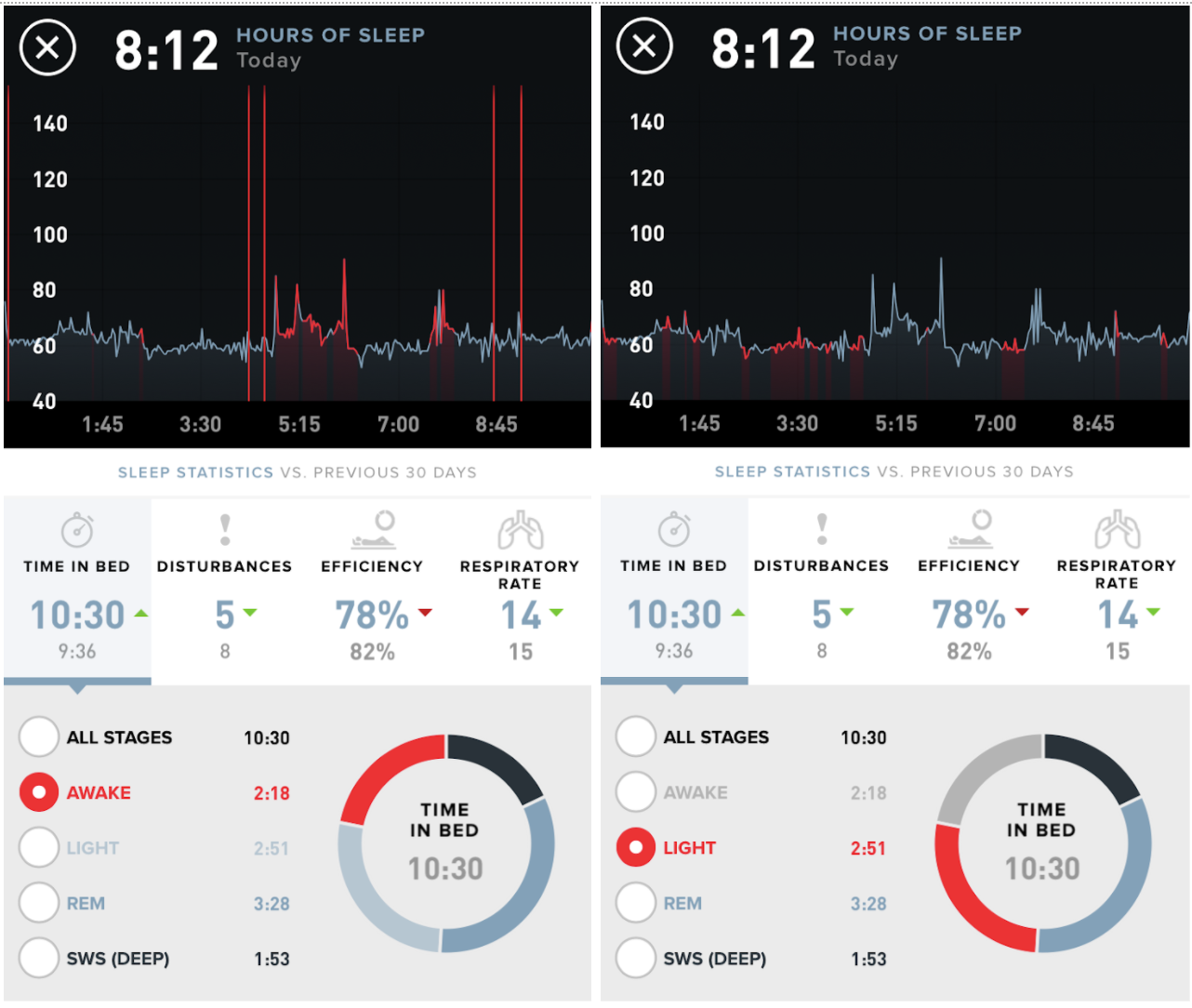 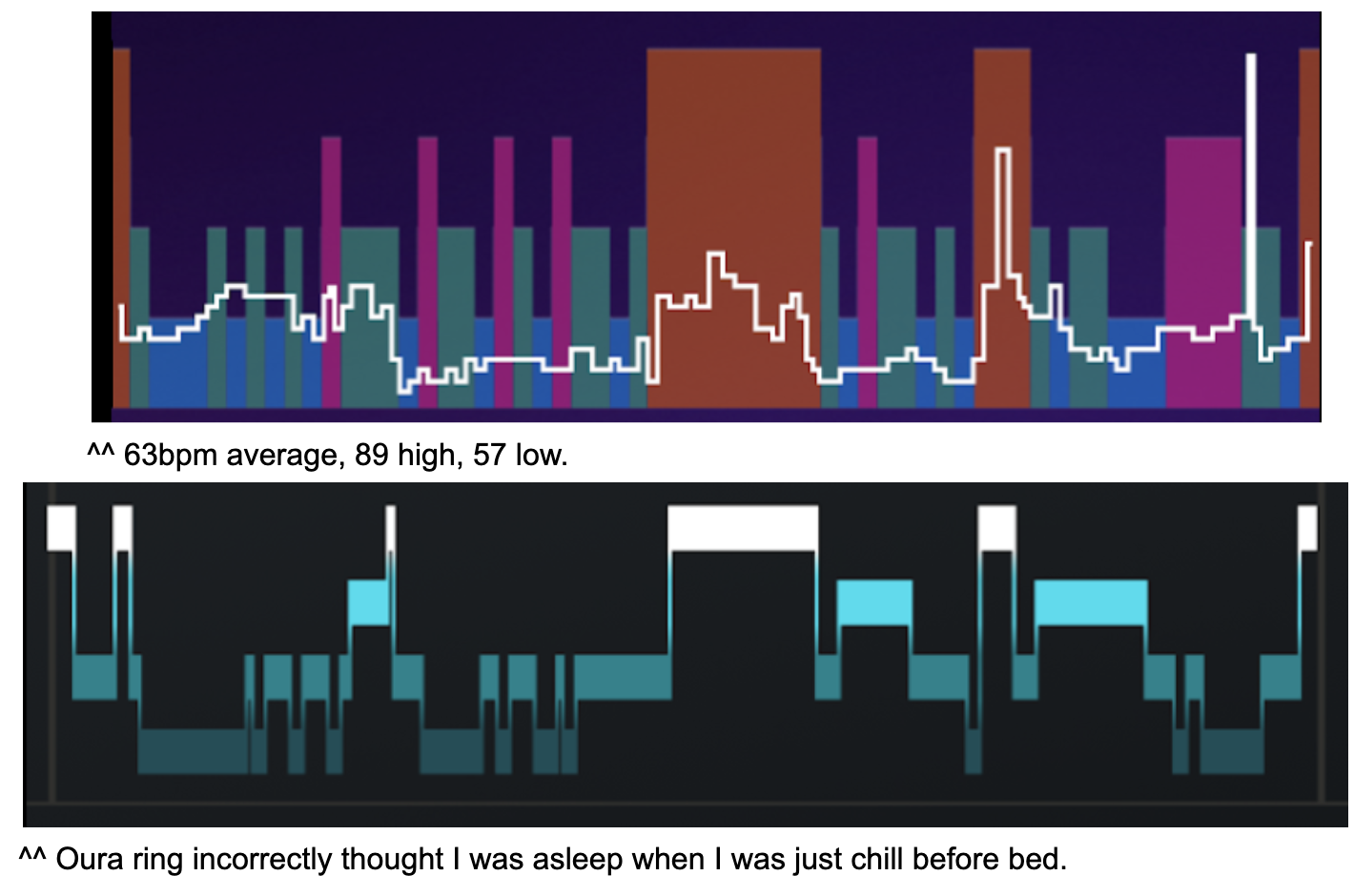 And in my workout the next day (i.e. a light run followed by light bike), I was totally zapped for energy and couldn’t keep my heart rate up: 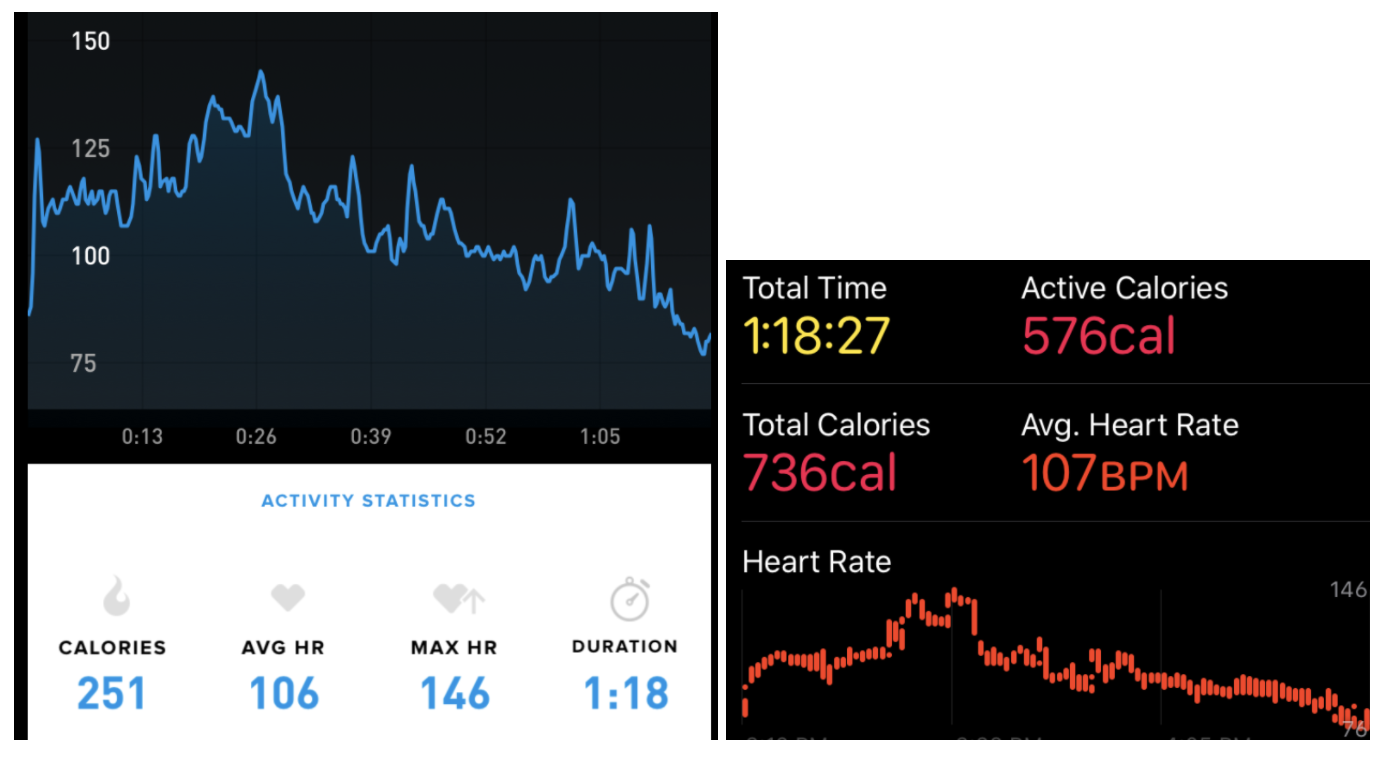 For example, here is the next day’s glucose readings:

Top glucose levels here read 160 mg/dL, which after calibration was more like 140 mg/dL, FYI (you have to be careful with CGMs).

Long-story short regarding meal quantity and composition during OMAD for me; it’s not a good idea to skimp on the carb ratio or quantity of food.

Insight #3: Going too crazy with OMAD food/carbs, especially eating too late, is very problematic for sleep and next-day workout performance

For example, here is a day where I went too crazy with brats and chips for dinner:

Anyway, eating too many refined carbs here (buns & tortilla chips w/ 12oz of beer) produced one of the most dramatic spikes in my whole 30-day experiment, which led to me getting super sleepy and falling asleep at the peak.

Interestingly, upon waking up in the middle of the night my blood sugar dropped significantly (perhaps some melatonin cleared to allow insulin release?).

Here is the gist of the sleep data from the above night (from the SleepWatch app on Apple Watch. As you can see, not great):

And workout data from the next day was similar to that shown above (i.e. low energy, struggled, etc..)

Insight #4: The sweet spot for me on OMAD seems to be a reasonably early dinner with plenty of carbs (but not too much!)

Here is a typical “good” OMAD day that leads to decent sleep and a solid workout the next day:

Peak here is reading 138 mg/dL, but after recalibration the G6 was again about 20mg/dL too high.

For dinner I had veggie straws as a snack, turkey sausage burritos with avocado, low-carb tortillas, corn, and cheddar cheese; plus peanut M&Ms for dessert to satiety (ended up being two small bowls full).

Here’s what sleep data looked like. I intentionally didn’t pick out a day with over 8hr of total sleep, as this is more closer to a typical “good” and realistic night: 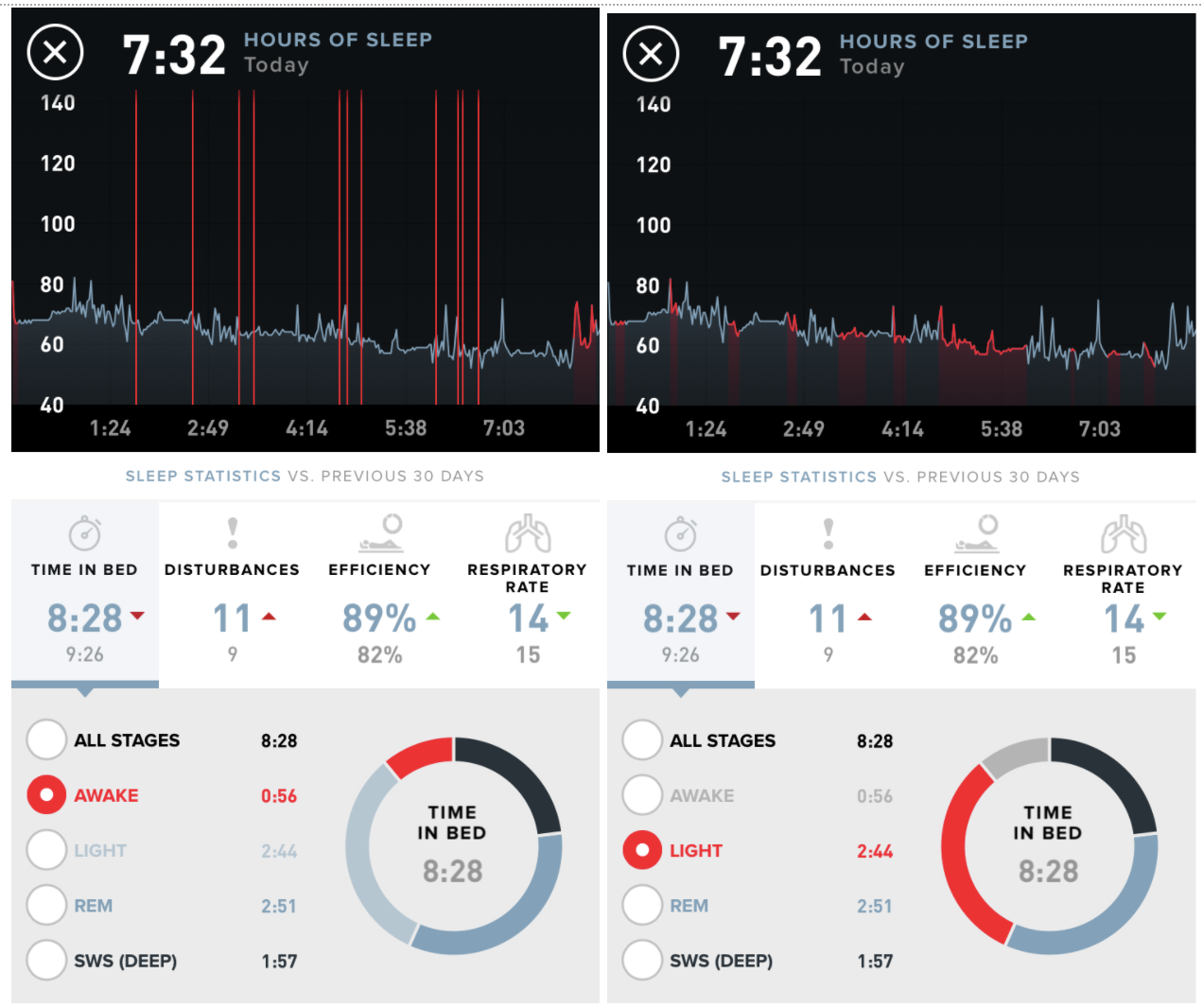 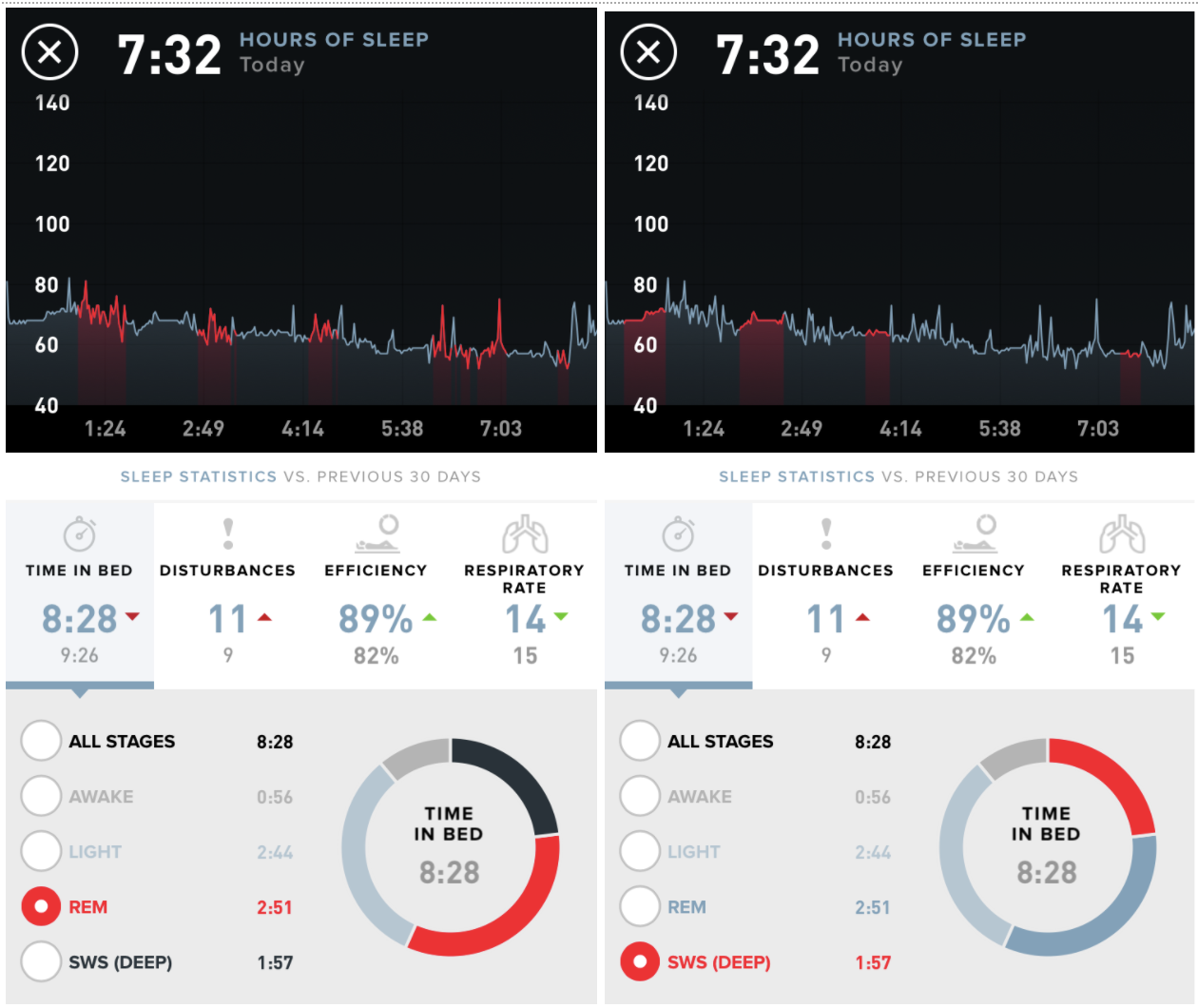 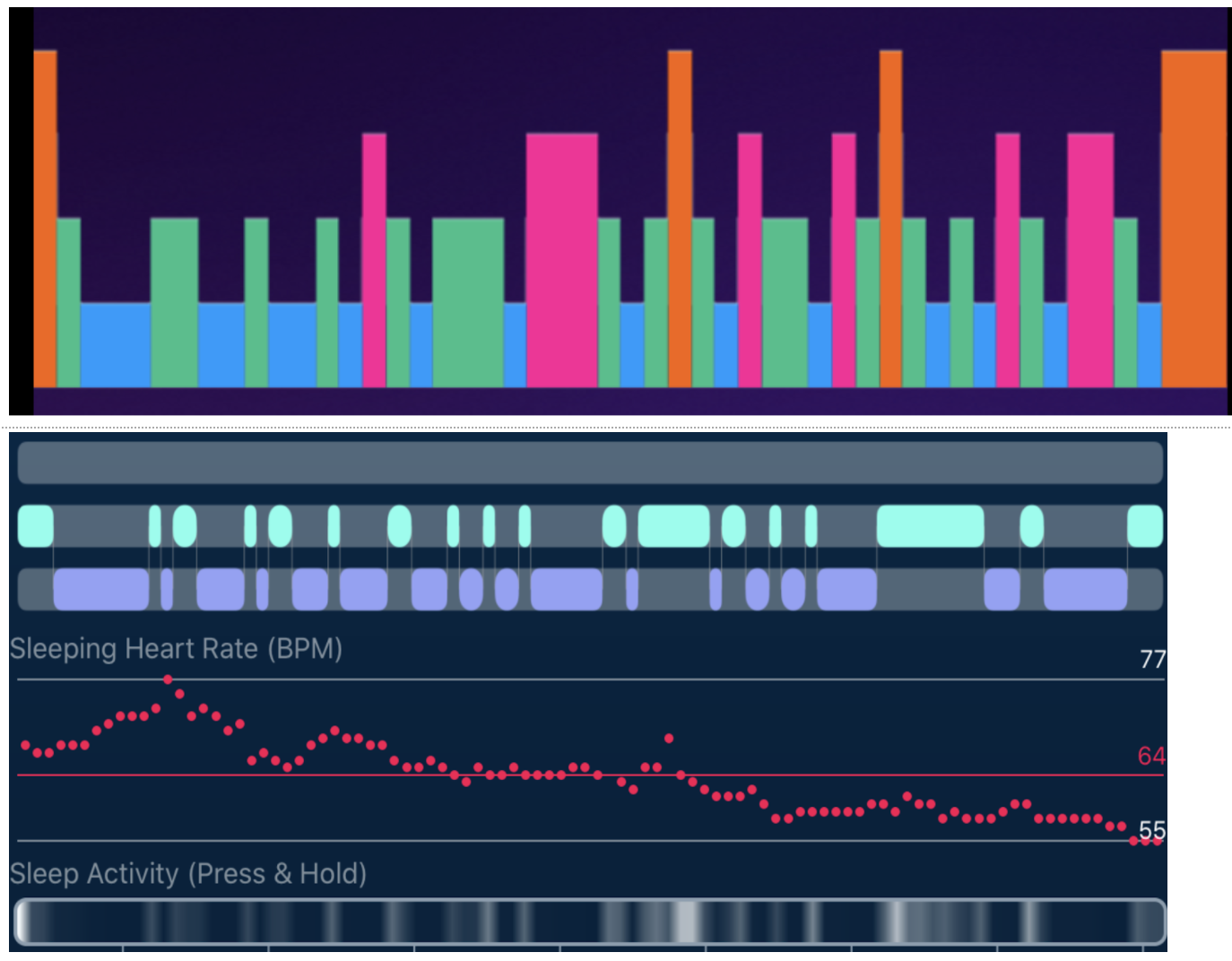 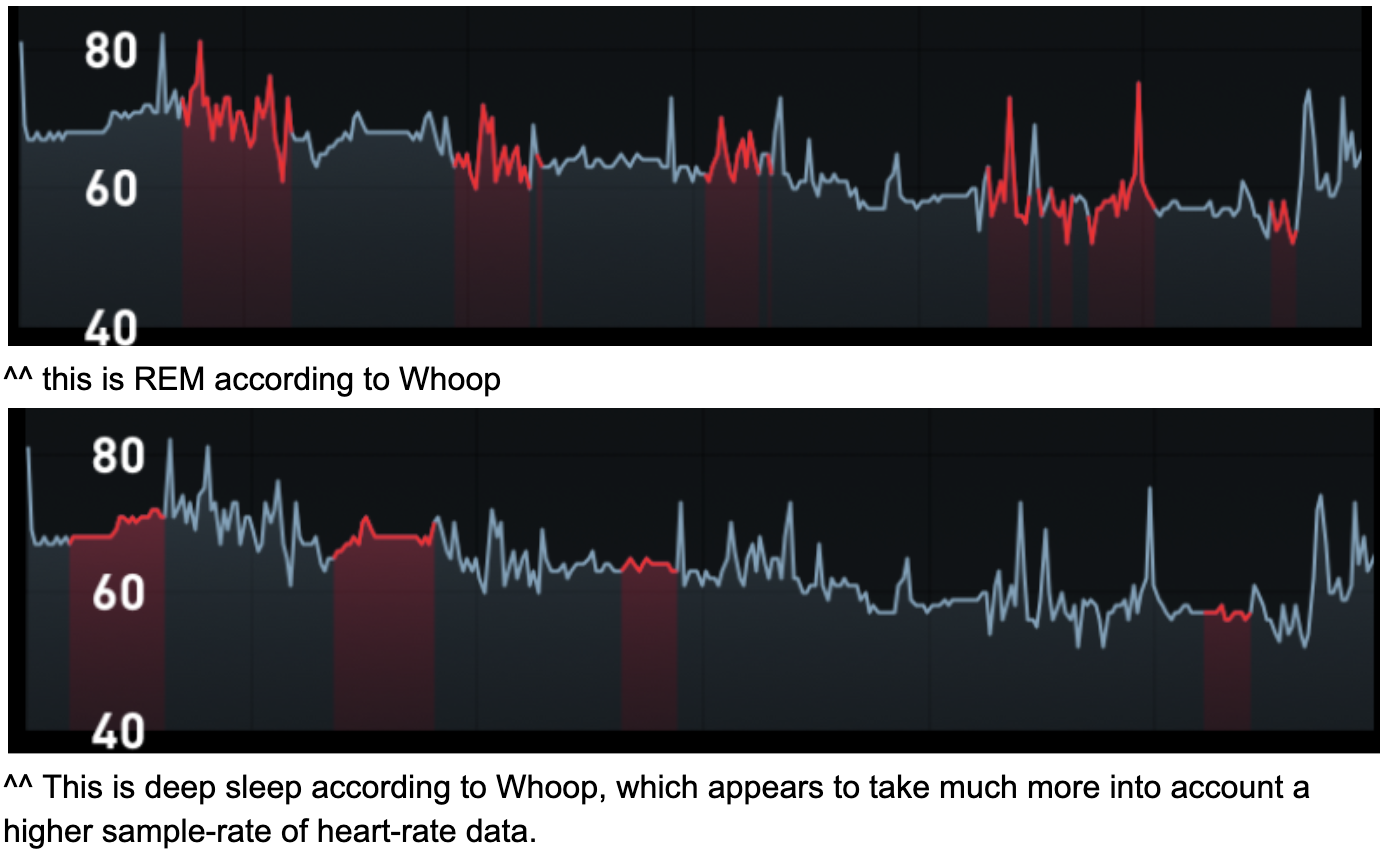 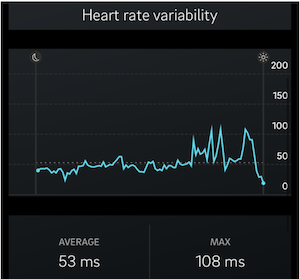 ^^ And this kind of profile for me for HRV is common during the course of the night (of course, everyone is different). 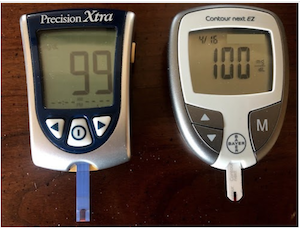 And then the workout (trail run) that day felt great:

At various times throughout the experiment I tried eating breakfast, lunch, moving the time window later or earlier, trying different foods, etc… and what I learned was the following:

Also, what I learned regarding optimizing sleep and workout performance on OMAD was a bit counter-intuitive. I had thought that limiting carbs and sticking to more “balanced” macros would produce better sleep and workouts, but that wasn’t the case. This is ultimately good news for me, as I enjoy eating a large dinner mostly ad libitum.

In a future study I want to look specifically at the effects of alcohol on sleep. I learned a long time ago that more than two drinks in one evening was problematic for me, but I’m curious if there is a way to isolate enough variables - and get reliable enough sleep-stage data - to learn where my personal limit is in terms of amount and timing of alcohol in the evening.

Author’s note: I recorded 144 pages of notes during this 30-day experiment, so there is a LOT more data I can (and will) likely extract and write about. Subscribe to my newsletter to stay tuned, and/or email me at will@wclittle.com and I’d be happy to answer any questions. Thanks for reading!

Topics: Health Science N=1 Experiments
Will Little Subscribe
Managing Director at Prota Ventures.
I'm a bioengineer-turned-software-developer and venture builder/investor. Learn more about me professionally on LinkedIn, personally here, and check out the podcast I host, Ventures.