The link between acrylamide, coffee, and cancer: Here’s what scientists know (and don’t know) A judge in California ruled this week that Starbucks, 7-Eleven, and many other businesses that sell coffee need to warn consumers via food labels about the ingestion of acrylamide.

California’s Prop 65 states that businesses selling products that contain one or more of 65 chemicals shown by scientists to cause cancer and/or reproductive disease must give customers a “clear and reasonable” heads up.

The judge wrote regarding the lawsuit that, essentially, the defendants couldn’t prove that acrylamide levels in their coffee weren’t below the levels deemed dangerous according to Prop 65 (which, looking it up, appears to be 0.2 micrograms/day for cancer, and 140μg/day for reproductive disease, where a warning label is needed if more than 1/1000th of this — i.e. 0.14μg/day — is exposed to people).

So, how much is in our coffee? How does it get in there? Where did the 0.2 μg/day and 0.14μg/day levels come from? What happens if we consume more than this? What data supports the link to cancer?

Let’s dive into it. 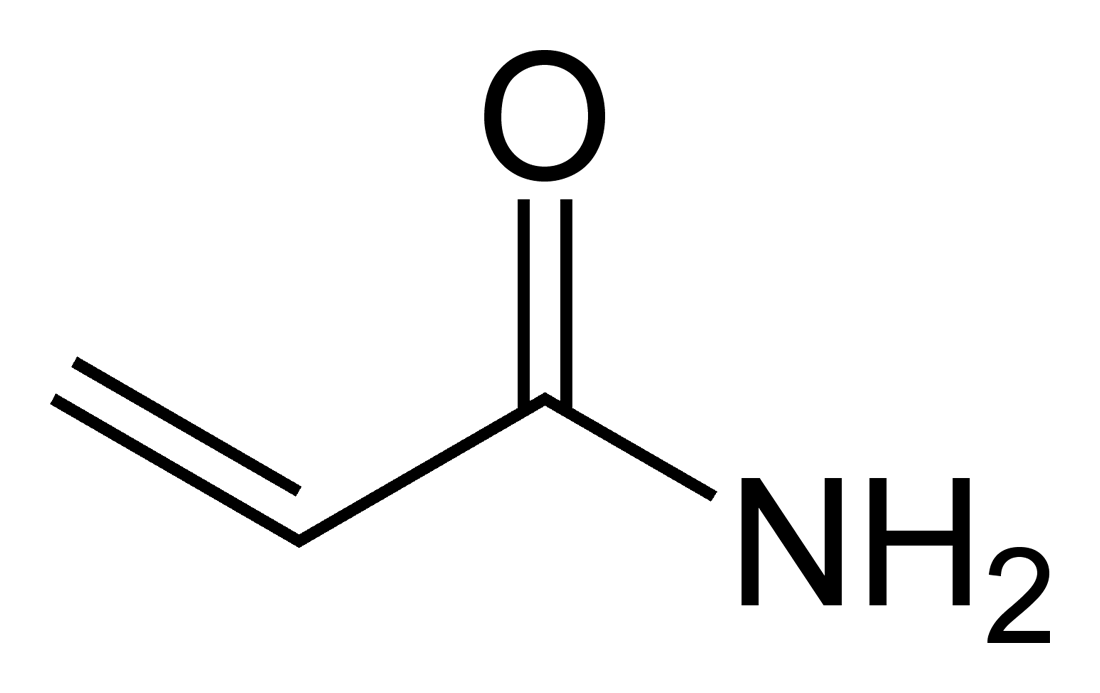 When I first read the headlines, I immediately thought of my past research days doing gel electrophoresis, which involved using acrylamide to make polymeric gels suitable for separating proteins of varying size in an electric field.

How does acrylamide get in my coffee?

As it turns out, subjecting foods with starches in them (e.g. coffee beans) to temperatures of 120 °C (248 °F) or more for extended periods of time produces acrylamide. 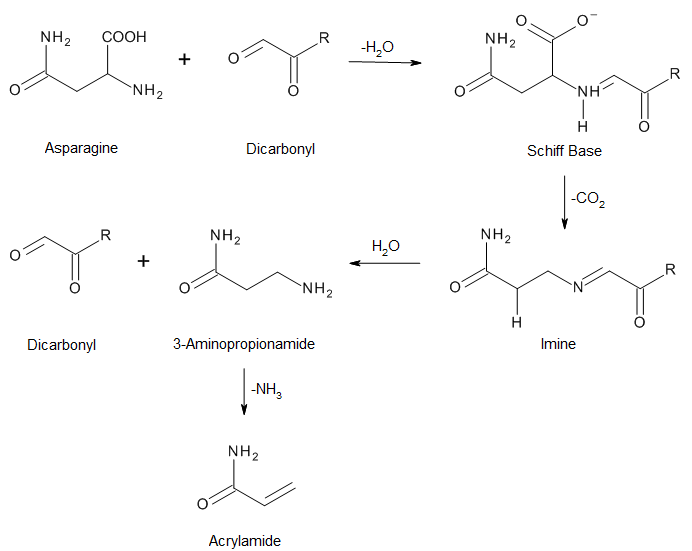 How much acrylamide is in my coffee?

This is, of course, the key question. Unfortunately, there’s not a universally clear answer, which likely explains — in part — why Starbucks et al. lost the lawsuit.

“It’s usually found at higher levels in light roasts because it forms during the first minutes of roasting and then degrades as the roasting process continues.”

Indeed, a 2013 research paper entitled “Studies of acrylamide level in coffee and coffee substitutes: influence of raw material and manufacturing conditions” looked at 42 types of coffee and found, specifically:

The highest mean acrylamide concentrations were found in coffee substitutes (818 pg/kg) followed by instant coffee (358 microg/kg) and then roasted coffee (179 microg/kg). One single cup of coffee (160 ml) delivered on average from 0.45 microg acrylamide in roasted coffee to 3.21 microg in coffee substitutes. There were no significant differences in acrylamide level between the coffee species ie. Arabica vs Robusta or a mixture thereof. The various methods of coffee manufacture also showed no differences in acrylamide (ie. freeze-dried coffee vs agglomerated coffee). A significant negative correlation was observed between acrylamide levels and the intensity of colour in roasted coffee; this was not the case however for instant coffee.

Where did the 0.2μg/day (cancer) and 0.14μg/day (reproductive disease) maximum levels come from?

This is not entirely clear. Prop 65 defines four specific ways that a chemical makes the list:

And, specifically, here are the stated reasons why the two numbers are listed:

For chemicals that are listed as causing cancer, the “no significant risk level” is defined as the level of exposure that would result in not more than one excess case of cancer in 100,000 individuals exposed to the chemical over a 70-year lifetime. In other words, a person exposed to the chemical at the “no significant risk level” for 70 years would not have more than a “one in 100,000” chance of developing cancer as a result of that exposure.

From a scientific standpoint, the main cause for concern comes from a wide array of rodent studies showing the formation of cancer when acrylamide is introduced to the diet. However, the levels of the molecule matters significantly.

A foundational study in 1986 maintained rats “on treated drinking water providing dosages of 0 (controls), 0.01, 0.1, 0.5, or 2.0 mg acrylamide/kg body wt/day for 2 years to assess the chronic toxicity and oncogenic potential of the chemical” and found that the latter group developed a wide host of tumors while the others didn’t. Doing some math, with the average human weighing 62 kg, this would be the equivalent of consuming 124 mg/day (i.e. 620k times the 0.2μg/day level).

In addition, humans metabolize acrylamide differently than rodents, and — interestingly — are known to consume on average 0.4 to 1.9 µg/kg body weight per day from the wide variety of foods that contain the molecule. That means a 62kg human consumes about 25–120µg/day of acrylamide, which is a couple orders of magnitude higher than the 0.2µg/day level set by Prop 65 for warning labels.

So, what’s the deal? Why would such a small level be set for Prop 65? Well, while it’s not clear where that number came from, if we take the 1/1000th safety buffer that Prop 65 uses for “no observable effect levels” regarding reproductive toxicity (Article 8), we can guess that the levels scientists are really concerned about is ~200µg/day.

What happens when consuming over ~200µg/day of acrylamide?

To be clear, human studies are still not conclusive about the role of ingested acrylamide in cancer and other diseases at the amounts we consume it. However, the ~200µg/day level is essentially at (or even slightly above) the level that a 2012 study found to show DNA damage in mice after 12 months of exposure (i.e. at 1µg/kg/day).

At the core of the debate, this is the type of data that freaks scientists out the most. While it’s known that mice and humans metabolize acrylamide differently, and comparing mice physiology to human physiology isn’t always appropriate, this is still data that gives both scientists and policymakers understandable concern.

What is the proposed mechanism of DNA damage (and therefore possible cancer) by acrylamide?

To get very specific, acrylamide goes through oxidative biotransformation by cytochrome P450 2E1 (CYP2E1) into glycidamide, which is even more dangerous than acrylamide with regard to adhering to DNA and causing replication problems that can cause cancer. These bound groups of molecules are called DNA Adducts.

As they relate to acrylamide:

The predominant DNA adduct induced by acrylamide, i.e. N7-GA-Gua, and one of its two minor adducts, i.e. 3-(2-carbamoyl-2-hydroxyethyl)-adenine, are both depurinating adducts, capable of generating apurinic/apyrimidinic (abasic) sites. The produced apurinic/apyrimidinic (abasic) sites are likely to give rise to 2′-deoxyadenosine incorporation during DNA replication, thereby leading to G → T transversions. Other minor adduct of acrylamide, i.e. N1-GA-Ade, has also significant miscoding potential, thus being highly promutagenic.

In other words, acrylamide binds to DNA and interferes with the normal replication processes by introducing mutations.

A comprehensive chart can be found here, which reveals the following: 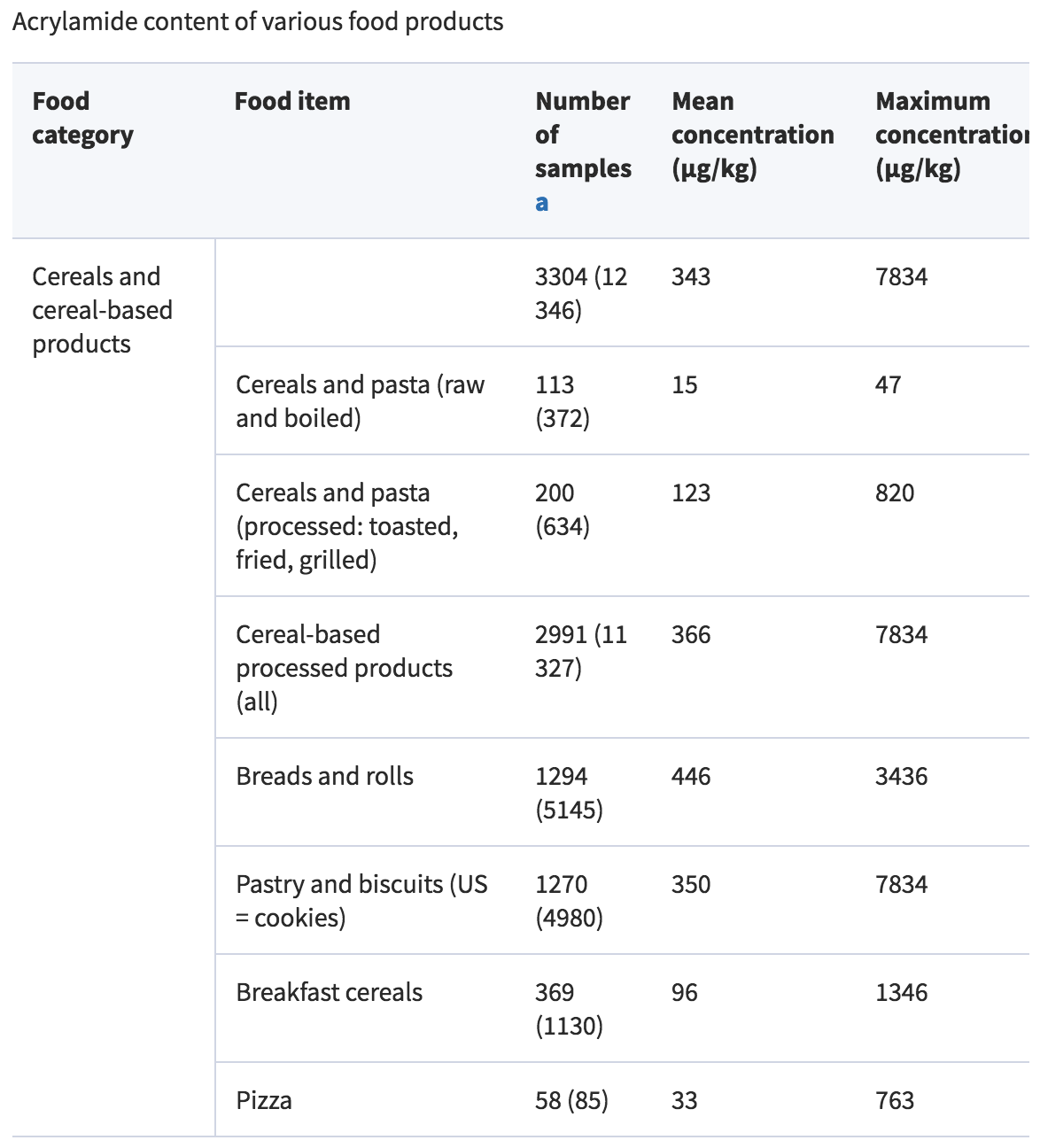 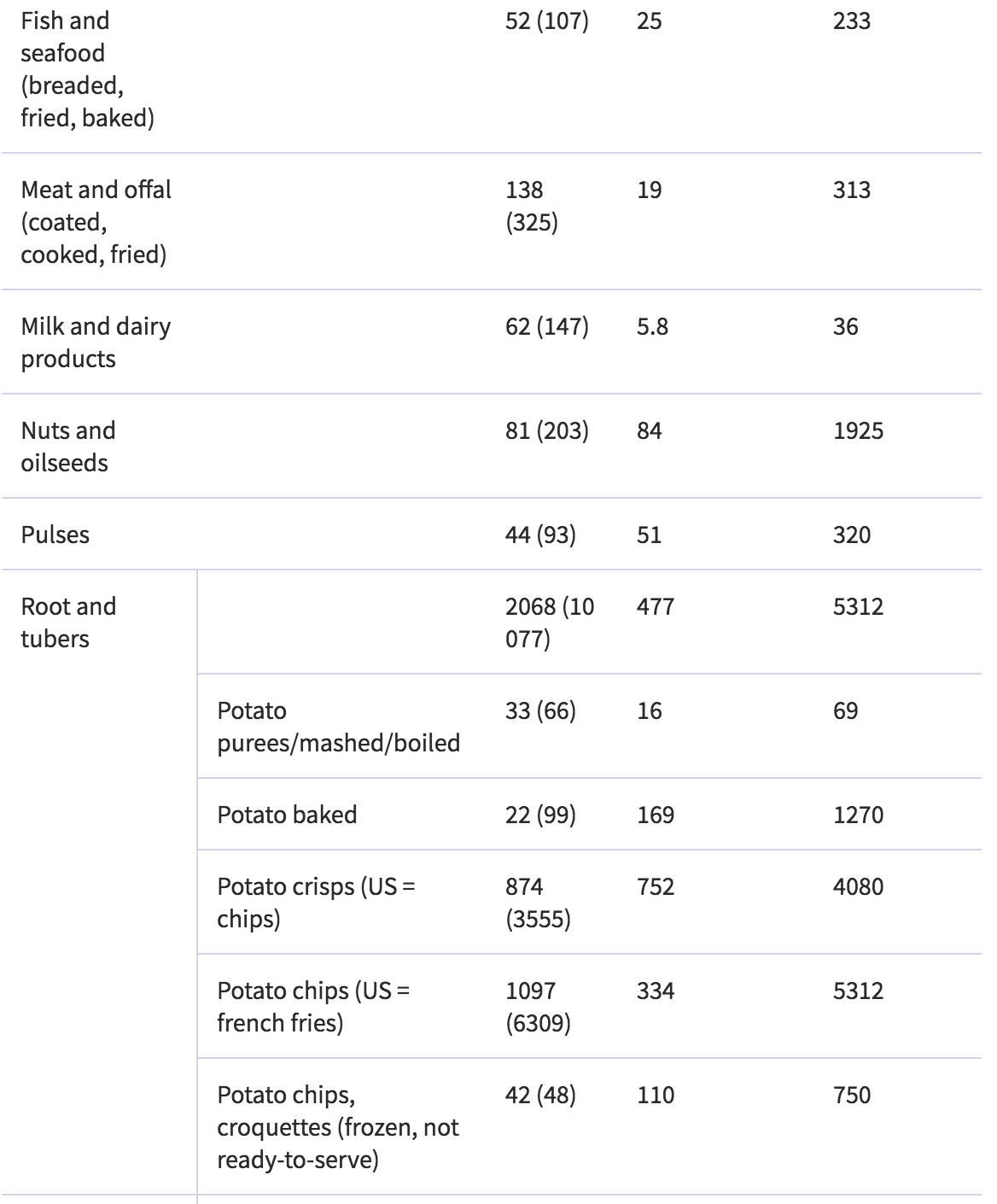 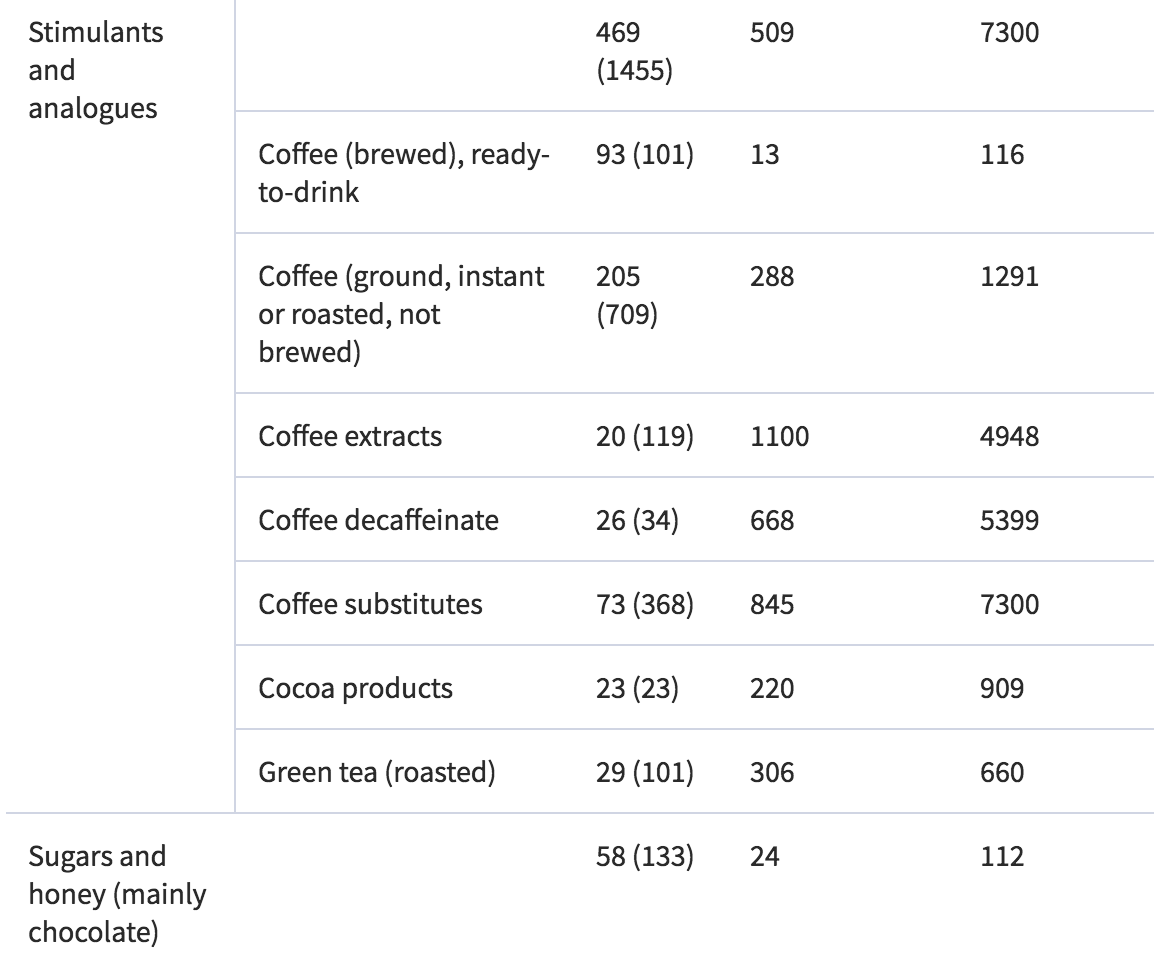 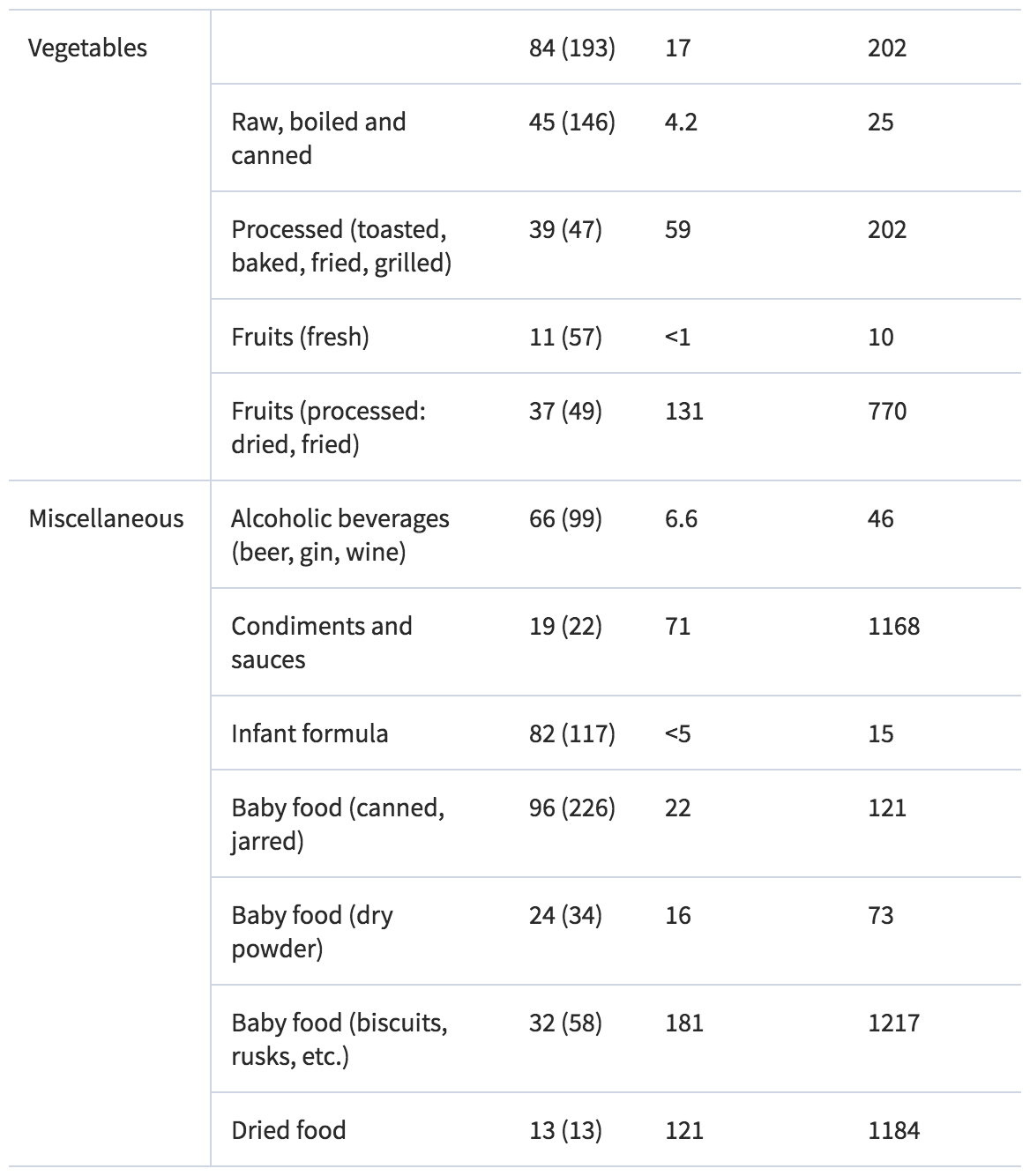 So what’s all this fuss about warning labels for >0.2µg/day of acrylamide in coffee?

Given the amount of acrylamide we normally consume (~1µg per kg of body weight per day, or ~62µg/day on average), it seems generally unwarranted to post warning labels on coffee that has only ~0.45µg–3.21µg per cup. That being said, Prop 65 is the rule of law in California, so you can’t blame a judge that learns a cup of coffee can have a few micrograms of acrylamide in it when the rule of law says products need a warning label at >0.2 micrograms.

A logical next step for Starbucks, 7-Eleven, et al. would be to get the warning minimums increased for acrylamide in Prop 65, which I can’t imagine is easy. They will likely need to fund further research, which — in the grand scheme of things — will be a public health benefit to further clarify both the cancer and reproductive toxicity effects of acrylamide in our food and drink.

Author’s note: Thanks in advance for any corrections/updates to what I’ve written here. I very much welcome feedback. Subscribe to my newsletter and I’ll let you know when I write more about health science topics (I also write about entrepreneurship, blockchain technology, and other science/tech topics). Feel free to comment below (or inline above), hit the clap button, and/or share this article with a friend if you’ve found it helpful. Thanks!