While the core promise of blockchain technology involves data security, decentralization, and transactional speed/reliability at scale, the main use cases we’ve seen thus far have been limited to long-term value storage (e.g. bitcoin) and programmatic transactions of digital tokens (e.g. ethereum). Understandably, to prove the initial usefulness of the technology, these early networks have optimized their protocols for decentralization and data integrity, rather than transaction speeds and fast finality.

However, to usher in the next generation of decentralized applications, blazing fast blockchains have arrived (e.g. Tezos, Cosmos, Livepeer, etc…). These new networks rely on a relatively small number of software and network engineers to maintain nodes on fast, secure, and reliable machines all over the world. (I’ll call these nodes “validators” in this article for simplicity, although many networks call them unique names to fit their use cases, i.e. baker, block producer, witness, orchestrator, etc…)

I’ve previously written about these Proof-of-Stake (PoS) networks and assessing the risks and rewards of staking/bonding/delegating tokens to PoS validators. Here, I’ll discuss more specifically how and why community involvement of validator teams (tooling, educational content, and governance) is fundamentally critical to the token value and success of their networks, and why evaluating such involvement is important when choosing a team with whom to bond/delegate/stake your tokens.

The first core aspect of community involvement for validators is building and sharing software that helps other validators and community members gain better insights into the network itself (both testnets and mainnet). While most often the core development team of a network will build tools funded by their ICO or other investment rounds, it’s important to look for tools built specifically by validators.

A good example of a validator contributing to the community is Figment Networks, who built and made publicly available a batch payments tool for Tezos bakers, a dashboard to track core Tezos metrics, and a comprehensive explorer for Cosmos that includes delegating and voting features. Another is Cryptium Labs, who built backerei, which provides automated reward payment and account management for Tezos bakers. Other community-built tools for Cosmos, specifically, include Big Dipper by Forbole, Stargazer by Certus One, Mintscan by Cosmostation, and a reinvestment script and cross-platform gaiacli binaries by Validator.Network.

While core teams of new PoS networks are expected to publish educational content and interact with media, an important insight into the strength of a network is to examine the content generated by its independent validators. These teams arguably understand the nuanced pros and cons of a network better than anyone outside of the core team, so the content produced by validators on their blogs, responses to newbie questions in forums and chat rooms, etc… can be especially insightful.

For example, notable cross-network validators with compelling content include Figment Networks, Chorus One, Certus One, Coinfund, Forbole, Mythos, Chainflow, and Bitfish. (To track down the content of network-specific validators, check out the validator lists I’ve included here for Cosmos, Tezos, Livepeer, Decred, Horizen, Loom, and IRIS.)

For example, Cosmos’ most recent mainnet, Cosmos Hub 2, has — as of this writing — five new governance proposals. The most recent one, Expedited Cosmos Upgrade Proposal (to upgrade the Cosmos Hub at block 500,000 on April 22nd 5pm GMT), has a very public voting record of every validator.

Chris Remus recently published the following poll and results about Cosmos network validators, which likely extends to other networks as well: 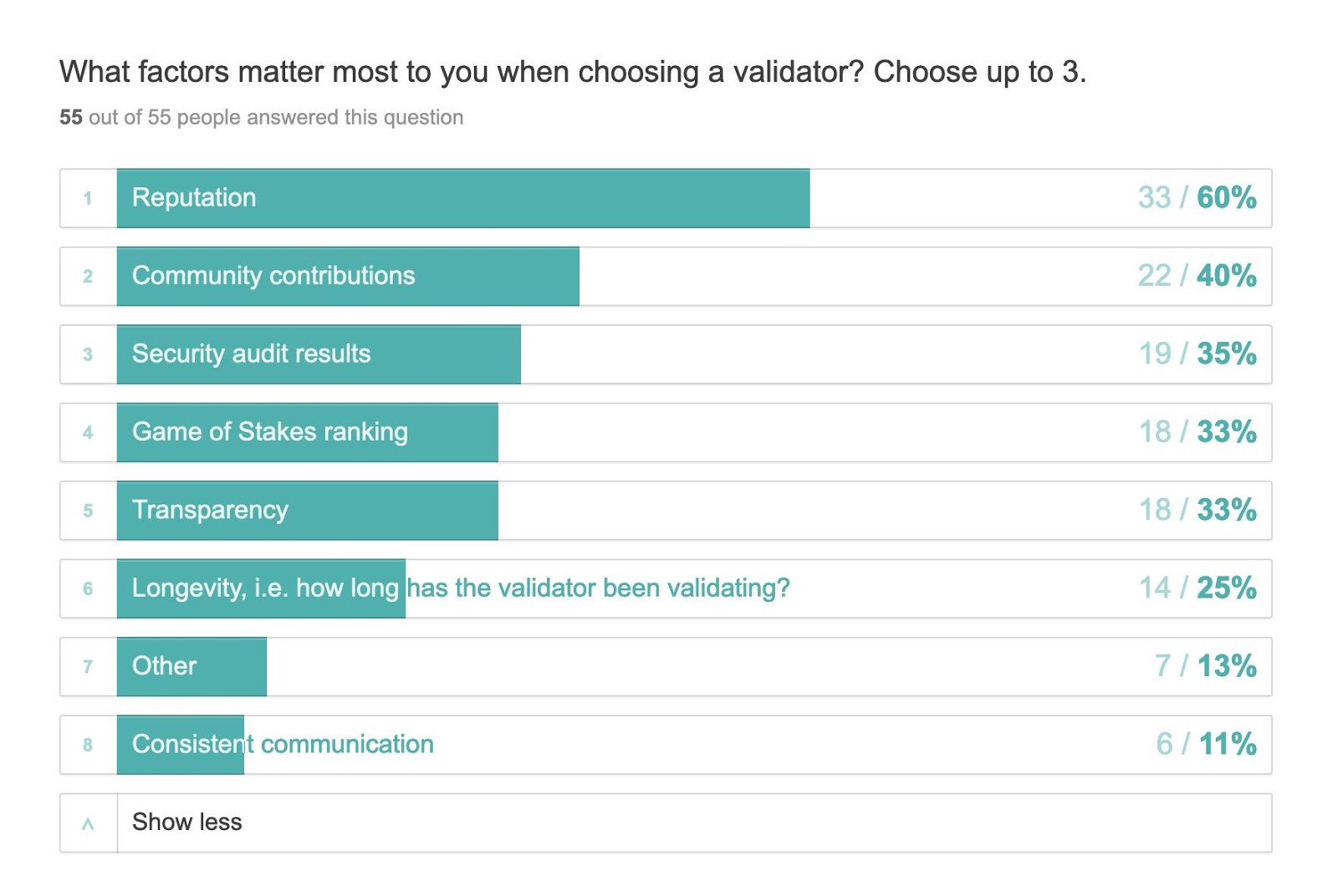 In other words, while of course it is important for validators to run performant and available nodes, token holders want to delegate/stake/bond to validators with solid reputations who actually contribute to the network with tools, educational content, and governance participation. Doing so raises the value of the network for everyone.

As a final word of caution for token holders evaluating validators on these networks, beware of validators that swoop in and promise bizarrely low fees when bonding/staking with them; you may be walking into a bait-and-switch trap.

There is a non-trivial cost associated with maintaining performant nodes and staffing up to contribute meaningfully to a network. Serious validator teams are fundamentally running a business that relies on income from staking reward commissions, and we — the collective blockchain community — ought to properly incentivize and compensate them for their work.

If too many of us stake/bond to the validators with the lowest fees, and these validators don’t contribute to the network via tooling, educational content, or governance participation, then this will ultimately sink a network (or at best significantly impede its growth).

In other words, if we stake with validators that are giving up far too much of their commission compared to others, they won’t have enough working capital to build up the network, which will lead to a lower value of the token. Instead, by staking with reputable validators that charge a reasonable fee, we are empowering them to raise the tide for everyone, and — most importantly — ensuring the fundamental value of these networks can be realized.

Undoubtedly, the future is looking extremely bright for validator teams with the right experience, reputation, and ability to contribute meaningfully to a network’s community. On behalf of the blockchain community as a whole, if you are part of a validator team — on any network — that is contributing tooling, content, and governance participation, *thank you* for what you are doing. Please let me know if you have notable examples that I should add above.

Author’s note: Thanks in advance for any suggestions/corrections for this article; I very much welcome feedback. FYI, as a disclosure, I am an investor in Figment Networks. Feel free to subscribe to my personal newsletter where, in addition to crypto and emerging technology, I also write occasionally about health science and startup life. Special thanks to Tony, Andy, and Lorien for review and insightful conversations about the above article. And finally, before you leave, please feel free to comment below (or inline above), hit the clap button, and/or share this article with a friend. Let’s keep the conversation going. Thanks!

Topics: Blockchains Proof-of-Stake
Will Little Subscribe
Partner at Prota Ventures.
I'm a bioengineer-turned-software-developer and venture builder/investor. Learn more about me professionally on LinkedIn, personally here, and check out my podcast, Ventures.