An introduction to Proof-of-Stake token yields: Assessing risks and rewards

Although the latest wave of blockchain hype has calmed down this year, the ferocity of teams working on the underlying technology continues to increase. The time is fast approaching when scalable, secure, and decentralized solutions for many core areas of technology (computing, file storage, payments, etc…) will be ready for application developers. When this collective tipping point occurs, there will likely be a rapid transition of user adoption from Web 2.0 apps (centralized) to Web 3.0 apps (decentralized).

Leading the way toward this transition are a collection of Proof-of-Stake (PoS) blockchain projects that are working on solving the scalability problems of Proof-of-Work without giving up too much security or decentralization. Even for the most tech-savvy blockchain users out there, however, navigating all the PoS variants, delegating/voting mechanics, lock-up periods, custody issues, etc… remains maddeningly complex.

My goal in this article is to quickly survey the most common PoS approaches for granting token holders “dividends”, address the high-level risk/reward issues to be aware of when making staking choices, and briefly discuss best practices for staking, pooling, and/or delegating your tokens in these networks.

In general, PoS approaches promise to solve the scalability problem while addressing a number of other problems related to governance, network security, maintenance, and improvement. Another key benefit is, of course, to move away from burning large amounts of energy.

I’ve written previously a primer on Proof-of-Stake and why it matters for the future of blockchains, which included a brief discussion of the PoS landscape from the perspective of consensus mechanisms and solving common PoS problems (i.e. initial distribution, 51% attacks, monopolization, and Nothing-at-Stake).

Here, I’ll limit the scope to three main areas of the PoS landscape regarding rewards/dividends on staked tokens:

What are the basic risk/reward factors to be aware of when holding and/or delegating tokens from these networks?

For networks that simply grant additional tokens for holding (not spending) tokens, there aren’t many risk factors to consider beyond basic diligence of the network (i.e. whether to get involved at all) and knowing how to claim the dividends via the appropriate wallet(s). For many users, venturing outside of exchanges and installing custom wallet software is a daunting task, so some exchanges are willing to share (or give all of) the dividend tokens to their users. Regardless of your approach, you should expect to receive between 4–6% per year yield (sometime much more) via these networks.

Moving up a level of complexity, when engaging with networks that operate masternodes, a deep-dive into the mechanics of setting up a node (or pooling into one) is required. With Dash, for example, you can pay for a hosting provider to provision the hardware for you and it is relatively straightforward to stake your tokens and get things running. You can, of course, venture forward and host/operate the appropriate masternode software of your own.

Given that a Dash masternode is currently valued at well over $200k (even after the 2018 correction), many people prefer to instead pool their tokens with others and pay a trusted source to run and maintain a node. Obviously, a large amount of diligence should be done on the operators of these nodes since it requires transferring custody of your tokens to them. (Ethereum’s upcoming Casper protocol, FYI, will be able to handle pooling via smart contracts, which will make that process relatively easier and “trustless” compared to other networks).

Finally, when considering all the variants of delegated PoS out there, unfortunately the user experience (UX) for voting/delegating is often quite clunky. What is critical to assess is the stability, security, and operating experience of the team running the validator/producer node(s) you are delegating to, in addition to the overall diversity of geography, hosting details, energy details, and regulatory/legal jurisdiction issues of the validators in the network.

Network core teams and validator teams will often create online explorer tools, such as eostracker.io where you can see at any time the status details of the EOS network and the top block producers there by vote. As another example, the explorer tool Hubble for the Cosmos Network, built by the multi-network validator team I’m working with (Figment Networks), also includes detailed uptime statistics for each validator to give network participants (and validators themselves) insight into the top-performing nodes, not just the teams with the most voting power. Other notable explorer tools include tzscan.io (Tezos), steemblockexplorer.com, explorer.lisk.io, explorer.ark.io, bitshares-explorer.io, explorer.oxycoin.io, nanode.co (Nano), cardanoexplorer.com, dfinityexplorer.org, explorer.livepeer.org, etc…

A key (and controversial) feature of some of the newer blockchains is a concept called slashing, which will penalize a validator node (and its delegates!) if poor performance and/or suspicious activity like double-signing ensues. For these networks (like Cosmos, Casper/Ethereum, Livepeer, etc…), it is especially important to get to know the teams and their network stability/performance (e.g. via block explorers) before bonding your tokens to them.

Finally, it’s important to note that by not bonding tokens in dPoS networks (e.g. freeing up liquidity to trade/spend), holders would be missing out on yield, effectively subjecting themselves to reduction in currency value via inflation.

Let’s be honest, diving deep enough into any one PoS blockchain project to monitor block producer/validator nodes and protect your stake rewards is difficult. There is a massive opportunity for wallet application developers out there to educate the general blockchain public about the risk/rewards and provide a UX to monitor validators and bond/stake appropriately.

One wallet team I’m aware of that is working on this is Balance.io: 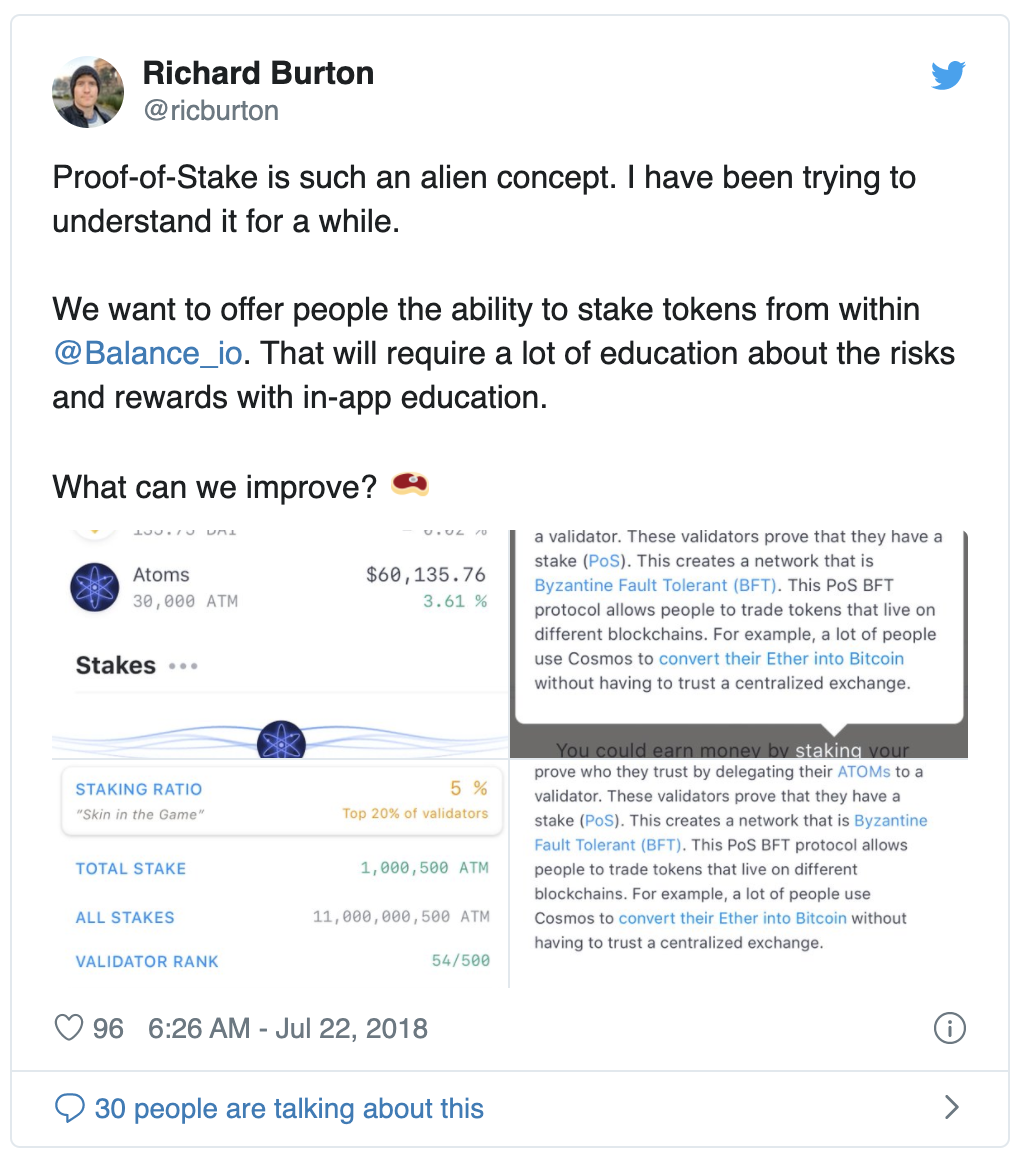 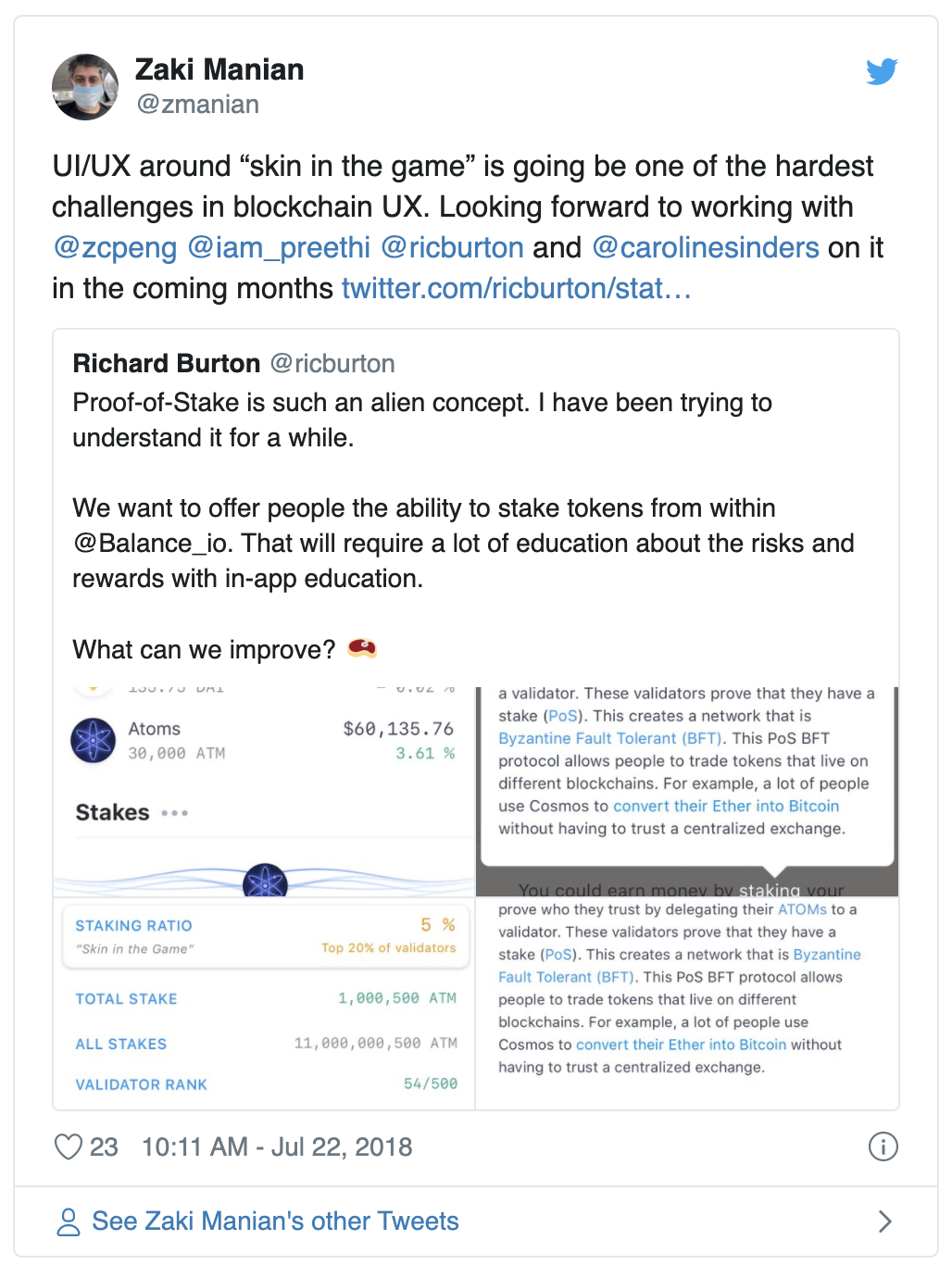 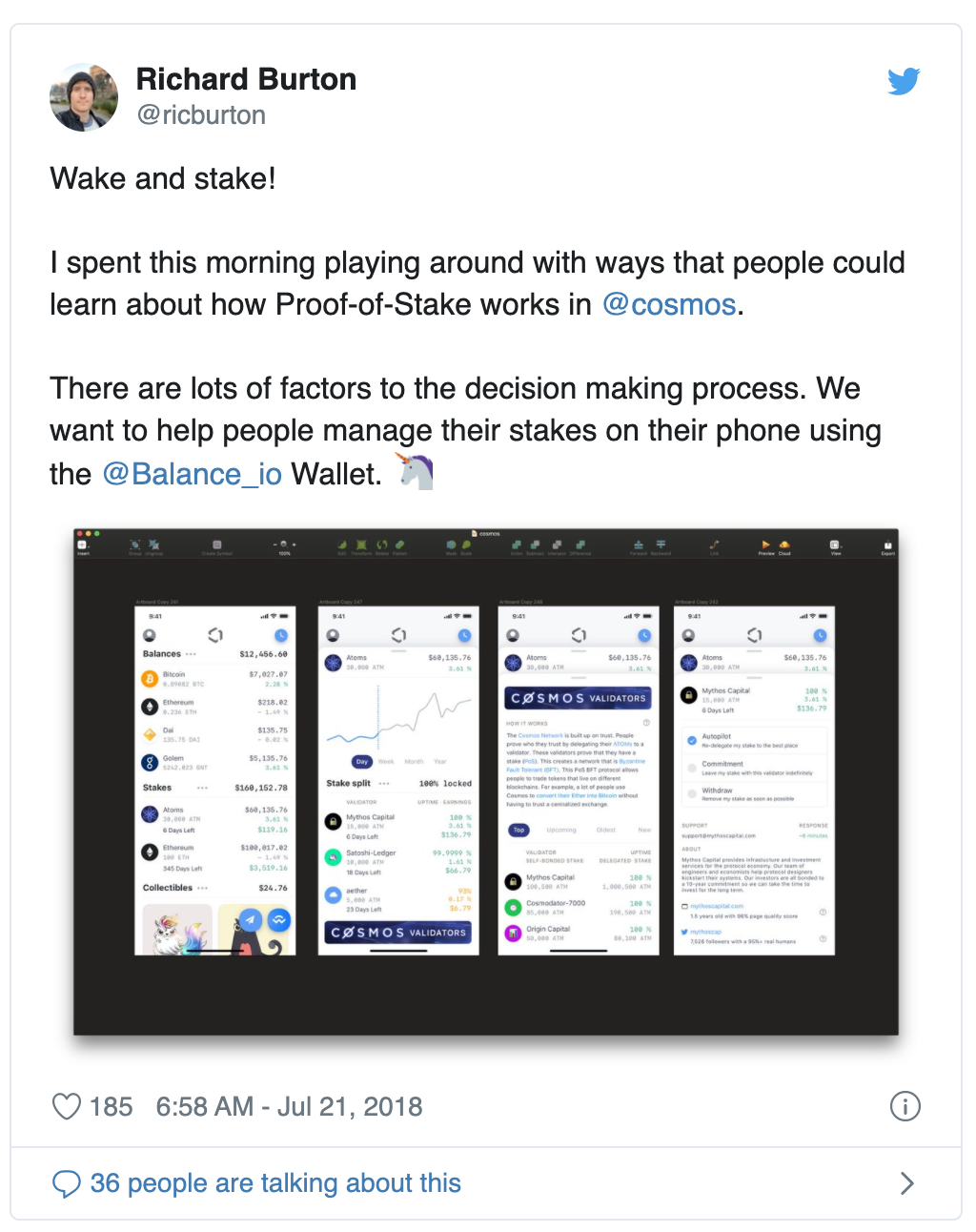 I’d be curious to learn what other wallet developer teams are working on tackling this problem for the community (let me know and I’ll make updates here, thanks!).

Overall, as you’ve likely experienced, it’s difficult to keep up with all the nuances of each of these emerging networks and decide where to spend your time (and your tokens). Obviously Twitter and Medium are great resources, as are the forums and chat applications that the various networks use with their communities, but a helpful tip is to identify the validator teams (e.g. via block explorers) that you believe are doing solid work and follow their content (newsletters, Twitter, Medium, etc…). These teams are highly incentivized to not only educate people about the networks they are involved in, but publish tools and content to help attract votes.

Besides Figment Networks, of course, the validator teams I’m most impressed with these days include Certus.one, Mythos, Chorus.one, Block3.co, CoinFund, and StakingFacilities.com. Who else should I/we be following?

Author’s note: Thanks in advance for any corrections/updates to what I’ve written here. I very much welcome feedback. Feel free to subscribe to my personal newsletter where, in addition to crypto, I also write occasionally about health science and startup life. Special thanks to Andy, Matt, and Lorien for review, feedback, and insightful conversations about the above article. And before you leave, feel free to comment below (or inline above), hit the clap button, and/or share this article with a friend to help others navigate the risks and rewards of staking tokens within PoS networks. Thanks!